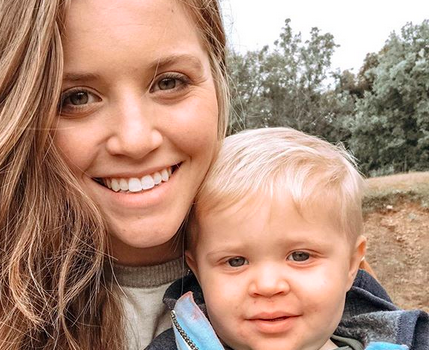 In the Duggar family, there are 19 kids. Plus, a handful of them are married and have families of their own. So, it’s almost always somebody’s birthday.

On Sunday, Gideon Forsyth celebrated his birthday. The little guy is the son of Joy-Anna and Austin Forsyth. He’s two years old now!

He’s definitely growing up fast. On their shared Instagram page, Joy and Austin shared a series of photos from Gideon’s life so far.

Since the couple shares an Instagram account, it’s unclear who posted the pictures and wrote the message about Gideon. They revealed that he’s been sick for a few days. But they “made the most of it!”

Along with the cute pictures, they shared a video of Gideon with Austin. Duggar fans think that he seems like such a happy toddler. Now that he’s two, they hope he doesn’t enter the “terrible twos”.

They also wrote about the two-year-old’s interests. They said, “Gideon is the happiest little guy, he loves making us laugh, reading books, playing in the dirt, and snack time!!”

In the comments section of Joy and Austin’s post, lots of fans are leaving comments for Gideon. They all have something nice to say, and they think he’s adorable.

Gideon’s relatives have lots of nice things to say about him too. Anna Duggar wished him a happy birthday. Jill Dillard said that he’s “such a cutie!!” She also said she loves his smile and laugh.

The Duggar family also posted on their Instagram page. They shared a video of Gideon and his aunt Jana playing the piano together. The proud grandparents mentioned how happy the little guy is.

HAPPY 2ND BIRTHDAY to our grandson Gideon, one of the happiest boys you’ll ever see!! We love you! 🥰💙 #gideonmartyn #playingwithauntjana @austinandjoyforsyth

Last year, Duggar fans weren’t so positive about Gideon’s birthday. Joy and Austin took a trip around the time of his first birthday, which didn’t go over well with fans.

Joy and Austin were parent-shamed for heading out of town without their young son—especially on his birthday. It turns out that they were at a conference, so it’s not like they could’ve rescheduled. Jessa Seewald was quick to back them up. Other fans argued that he doesn’t know when his birthday is and won’t remember.

Duggar fans were happy to see Joy and Austin made it home the evening of Gideon’s birthday so they celebrated then.

Can you believe that Gideon is two? Don’t forget to check out the pictures from Joy and Austin.

‘RHOBH’: Camille Grammer Spills Details On Erika Jayne’s Legal Troubles
Brian Austin Green Agreed To Appear On ‘DWTS’ Under Certain Terms
Why Kim Kardashian Claims She Is Moving Out Of Her $60M Mansion
‘OutDaughtered:’ Where Are The Busbys? Social Media Absence Explained
Quick And Twisted: ‘Survivor’ Is All New Due To COVID