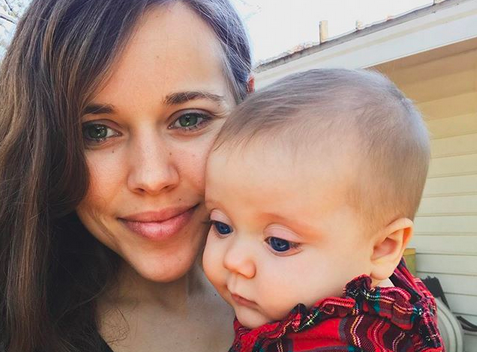 Jessa Seewald is stepping out of her comfort zone, and Duggar fans are loving it! As fans know, Jessa finally had a baby girl after having two sons with husband Ben Seewald. Together, they have three kids, Spurgeon, 4, Henry, 3, and Ivy, 9 months.

Fans are loving Jessa’s newest Instagram post featuring her 9-month-old daughter. In the post, she and Ivy are wearing coordinating dresses. She talked about how matching isn’t typically her thing. But, she had to twin with her daughter in the cute dresses.

The Duggar daughter wrote, “I’m not a mom who usually dresses my kids alike or does a whole lot of the ‘matching’ thing… but baby girl, this time I just couldn’t resist. 👩🏻👶🏻💞”

I love them. #blessed

Lots of fans have sweet things to say about the cute pictures Jessa and Ben shared. One fan wrote, “UGH Y’ALL ARE SO CUTE“. Another said, “So cute💜 love the dresses! You look amazing!” Plenty of other comments echoed those same sentiments.

Lauren Duggar said that the pictures are “so cute!” And, Carlin Bates left some heart-eyed emojis.

In addition to leaving these compliments, Duggar fans had to know where Jessa found these dresses. As it turns out, she got them from the Bates Sisters’ Boutique. She added this to her caption and answered several questions in the comments section of her post.

I’m not a mom who usually dresses my kids alike or does a whole lot of the “matching” thing… but baby girl, this time I just couldn’t resist. 👩🏻👶🏻💞 . @batessistersboutique, you have the cutest dresses. 😍😍

Duggar fans can hardly believe that Ivy is already nine months old. One fan commented on Jessa’s post and said that they could see Ivy’s teeth coming in. Jessa responded and said that Ivy has two teeth and that she only cut them recently.

Last week, Ben shared a video of Ivy standing up in a pack ‘n play. The little girl pulled herself up on the side. Before long, she’ll be walking and talking. Fans are loving seeing Jessa’s kids grow.

What do you think of Jessa’s and Ivy’s matching outfits? Do you love them as much as the rest of the Duggar fans do? Leave a comment below and share your thoughts.