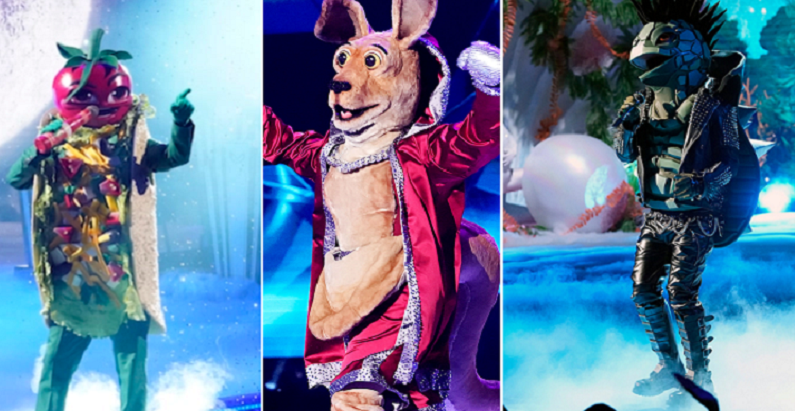 The Masked Singer introduced viewers to six new contestants on Wednesday night, February 19. In the episode was the Taco, who’s performance of “Fly Me to the Moon” was one of the best performances of the night. There were many guesses for the Taco. But judges and fans were ultimately convinced that it was Fuller House star Bob Saget under the mask.

Of course, wild guesses are a big part of the show. Every time the show airs, certain celebrities trend on social media. Most celebrities are aware that they’re among the popular guesses. Masked Singer fans feel that Jordyn Woods is the Kangaroo and Lance Bass is the Turtle. Of course, there’s the rumor that Bob Sage is the Taco. Now, all three popular guesses are setting the record straight.

As TVLine reported, Bob Saget became a popular guess. His name trended on Twitter in the U.S. after Wednesday night’s episode. Fellow Masked Singer judges Ken Jeong, Jenny McCarthy, and Robin Thicke had a feeling that he was the Taco.

Thicke explained the Taco’s clue package, which showed San Francisco and a pile of videotapes. Both Full House and Fuller House take place in San Francisco. Meanwhile, Saget hosted ABC’s America’s Funniest Home Videos from 1989 through 1997. On Wednesday night’s episode, the Taco moved on to the next round. But on Thursday, Feb. 20, Saget insisted that he’s not on the musical competition.

“I ain’t the friggin’ Taco,” he tweeted. “Why would I want to be a mascot? They say any press is good press – but the taco? A burrito, maybe.”

Saget has since deleted the tweet. Other speculations for the Taco include comedian Martin Short and Dancing with the Stars host Tom Bergeron, who took over for Saget on America’s Funniest Home Videos in 2001.

Jordyn Woods responds to the rumors that she’s the Kangaroo

We know Bob Saget isn’t on The Masked Singer. But is Jordyn Woods on the show? She also set the record straight at an event for the Bria Murphy Art 4 All nighttime exhibit on Thursday, Feb. 20. At the event, Woods talked to Entertainment Tonight about the fan theories.

“That’s crazy,” she said. “No, I love that show so much. My sister and I watch it all the time. I wish I could be on that show.”

When she was asked if she was really the Kangaroo, she denied the speculations. Woods has been too busy to keep up with The Masked Singer. She admits that she’s a big fan of the Kangaroo even though she’s a little behind on Season 3.

“No, I actually love the Kangaroo though. I’ve been watching this season, but I’m late a couple episodes, so I need to catch up.”

The Masked Singer fans felt that Woods was the Kangaroo. The Kangaroo’s clue package hinted that the contestant became famous for all the wrong reasons. Last year, Woods found herself in a cheating scandal with Khloe Kardashian’s ex-boyfriend, Tristan Thompson. There were also hints to basketball and makeup, two of Woods’ loves. It’s no wonder fans were convinced she was under the Kangaroo mask.

The Masked Singer fans strongly feel that Lance Bass is the Turtle. The masked contestant sounds like someone who was in a boy band. He told Entertainment Weekly that he’s been asked about it constantly.

“I do get a lot of tweets about ‘Lance is definitely the Turtle’,” Bass said. “I get lots of weird tweets, and everyone guessing it’s me, but unfortunately, it’s not.”

While the former member of NSYNC agreed that the show looks fun, he is not sure if he would have time to compete on the series.

What are your thoughts on the fan theories? Sound off below in the comments section.

Jeremy Vuolo Says He Risked His Life Over Rapids
Lifetime’s ‘Left For Dead’ Continues Summer Of Secrets Series
WOW!! Zoey Klein Shows Off Impressive Water Skills
Khloe Kardashian Claps Back Once Again Over Plastic Bottle Controversy
‘The Young And The Restless’ Spoilers, June 11-14: Summer Needs To Watch Her Back