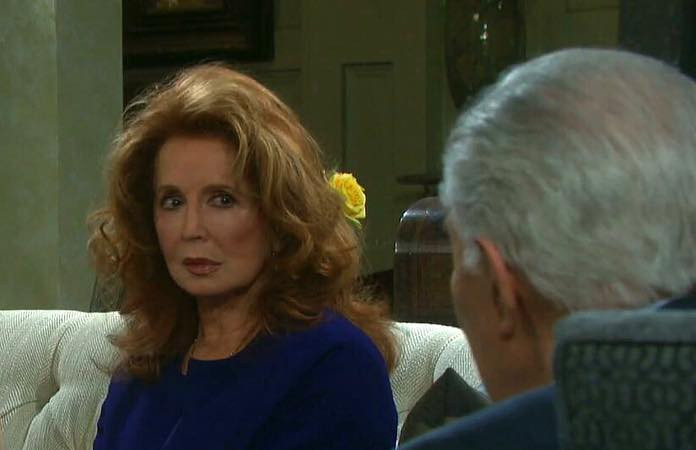 Days of Our Lives fans are settling in for another week in their favorite fictional town, Salem U.S.A. Last week Salemites learned that baby Mickey has a bone marrow match. But who is it and what’s the catch?

Could DOOL’s Gabi Be a Bone Marrow Match?

Spoilers indicate that the shocking bone marrow match is none other than resident bad girl Gabi (Camila Banus.) There is speculation that Gabi won’t give up the goods easily. Reportedly, she bargains the life-saving bone marrow for her freedom.

As fans know, Gabi is likely on her way to prison for what she did to Julie (Susan Seaforth Hayes.) Lani (Sal Stowers) blew up Gabi and Eli’s (Lamon Archey) wedding last week with the revelation that she was forced to dump Eli or Gabi would harm Julie.

Could Gabi go free after all?

DOOL‘s Will (Chandler Massey) has been in jail for months for something he didn’t do. A few weeks ago, the daytime drama revealed that a drunk Maggie (Suzanne Rogers) was driving the car that hit Adrienne, not Will.

As the week progresses, Maggie’s nightmares become more clear until she finally realizes the truth about who killed Adrienne. It seems she takes responsibility because an innocent Will is released from prison.

Will isn’t the only innocent man in jail. Ben isn’t the one who killed Jordan (Chrishell Stause.) However, after being recaptured after breaking out from prison, Ben is in serious trouble. Although his girlfriend is still determined to find the real killer, Ben begins to say his goodbyes.

Can Ciara track down the real killer before Ben is executed?

As fans know, Steve (Stephen Nichols) is actually a brain-washed Stefano and he has Kayla (Mary Beth Evans) held hostage.

‘Stefano’ shows up on Justin’s (Wally Kurth) door and has a proposal. Kayla for Marlena (Deidre Hall.) Will Justin do anything for his new love or is there a line he won’t cross?