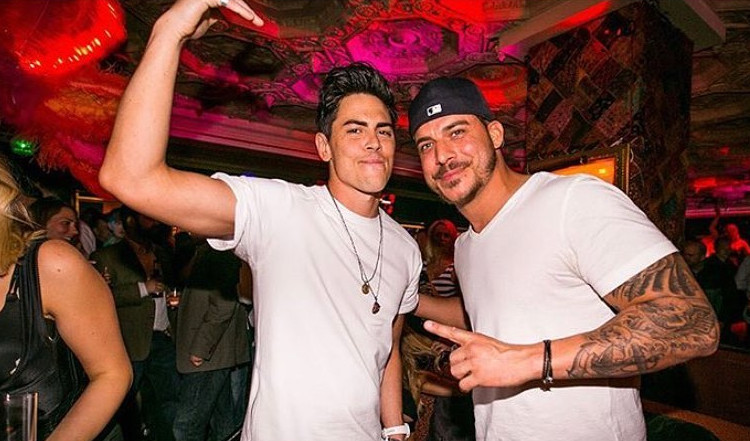 Vanderpump Rules star Jax Taylor is not happy with Tom Sandoval. While the two have known each other since their early modeling days, their friendship took a hit after the Season 7 reunion.

When Jax and the rest of the VPR cast ganged up on co-star James Kennedy, Sandoval and his girlfriend, Ariana Madix, stood up for the DJ. The reunion got so heated that Jax threatened to revoke Sandoval’s best man duties.

At the beginning of Season 8, Sandoval and Jax were still at odds. After Sandoval missed one of Jax’s bachelor parties, Jax again mused over his former close friend’s role in the wedding. While the wedding airs later during the season, we know that Sandoval did, indeed, stand up for Jax at the wedding.

Jax always planned to have two of his friends share best man duties – Tom Sandoval and Tom Schwartz. However, when discussing relieving Sandoval of his duties, Jax admitted to Brittany Cartwright that he didn’t think Schwartz could handle it alone.

That may have played a part in why Jax kept both TomTom co-owners in the wedding party. TV Shows Ace reports that Jax now regrets the choice. If he could do it over, Jax said Sandoval would be a guest, not a best man.

For his part, Sandoval recently opened up about Jax’s comments as ‘hurtful.’ And this was before the pastor drama played out on the show. Things are more tense than ever between the once-close friends.

Jax loves to use social media to interact with his fans, block the ones he disagrees with and attack his co-stars. Sandoval is his latest Twitter victim.

The reality star has been low-key shading Sandoval on social media since the VPR Season 8 premiere. However, things took a more brutal and relentless barrage of tweets earlier this week, Reality Blurb reports.

The latest episode of VPR revolves around the pastor that Brittany and Jax chose for their wedding. Old posts the pastor made against gay people resurfaced and once the media got ahold of the story, it came to Lisa Vanderpump’s attention.

At that point, Brittany and Jax fired the pastor and N’Sync member Lance Bass stepped in to officiate the wedding. All’s well that ends well, right? Not according to Sandoval. He approached Jax at Peter Madrigal’s birthday party and asked Jax why it took Lisa getting involved for something to be done about the pastor.

Jax lost his s**t, to put it mildly. He initially shut the conversation down and walked away. However, he then vented to his co-stars and Brittany. Things really hit the fan then. Except for Ariana, everyone else sided with Jax that Sandoval was out of line to bring it up.

After the show aired, Jax took to Twitter to vent about Sandoval’s motives. Jax felt his VPR co-star was looking for attention, not answers.

Hey let’s wait till we have a party for poor Peter who just wants to have a good time, and the cameras are up to bring this up… you had all day to talk to me about this. Purely ruined the party so you could get attention in my opinion.

Many fans agreed with Jax, but one fan took Sandoval’s side. The follower tweeted to Jax pointing out that Sandoval does a lot for the wedding. Jax responded by calling Sandoval a phony who only does things for good TV.

Tom does things for tv so he looks good. Period. You all live in a fantasy world. https://t.co/I4qMa8omvQ

Jax wasn’t done with Sandoval yet. A fan accused Jax of turning on his friend after being forgiven for sleeping with Sandoval’s then-girlfriend, Kristen Doute.

Jax broke the bro code and revealed some dirt. He defended sleeping with Kristen by saying that Sandoval was cheating on her anyway.

Umm he was banging a girl from Vegas the week before…relax. let’s not forget, Tom has cheated as well.. https://t.co/YEwgVjIVMV

Neither Sandoval or Kristen have responded to Jax’s accusations.

Preview for next week's #PumpRules!

Jax kicks Sandoval out of his wedding and considers disinviting him from Kentucky. Scheana sabotages Brett and Charli’s date! pic.twitter.com/lofjJ1TYfV

Drop a line in the comments and let us know if you’re Team Sandoval or Team Jax.

Vanderpump Rules airs Tuesdays on Bravo. The upcoming episode is sure to have more of the drama surrounding the pastor and Randall Emmett’s debut appearance on the show.

Josie Bates & Kelton Balka Have HUGE News About Baby Hazel
Does ‘Seinfeld’ Have A Netflix Release Date Yet? When To Expect It
Erika Jayne Responds To Makeup-Free Photos Amid Latest Controversies
‘Bachelorette’ Shocker: Katie Thurston Opens Up About Sexual Assault Trauma
Emma And Alex Make A Dating Profile For Their ‘Bossy’ Sister Anna