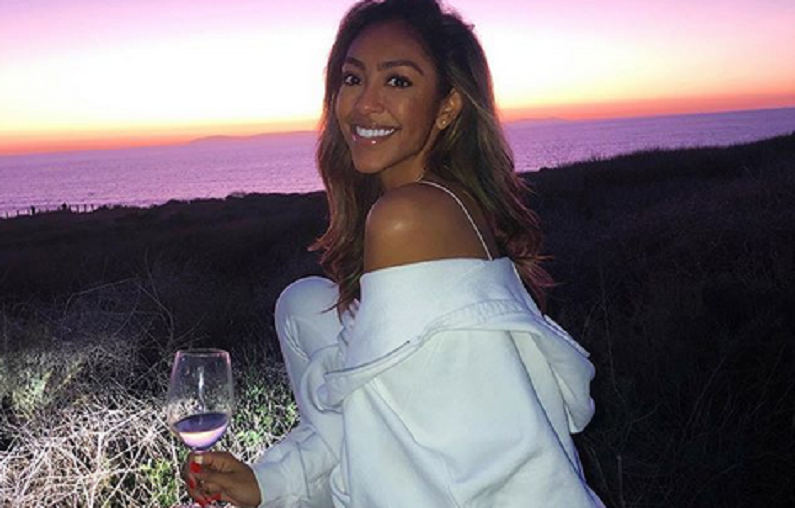 Tayshia Adams would make the perfect Bachelorette, according to this Bachelor Nation alum. Bachelor alum Ashley Iaconetti shared her top pick for the 2020 bachelorette. Tayshia first appeared during Colton Underwood’s season where she made it through the final three. She then gave love another shot on Bachelor in Paradise. Since she struck out on both shows, Bachelor Nation feels she should be given a third chance at love.

It makes sense since Peter Weber’s season is the most dramatic yet. While most fans love the drama, most people can’t stand the constant fights among the contestants. There are plenty of fans who wished that Peter’s season was similar to Colton’s season. They feel that most of the contestants were genuine and wanted to find love.

Ashley I. really wants Tayshia Adams to be the next Bachelorette

Ashley Iaconetti told Life & Style that Tayshia would be a “really good choice” as the next Bachelorette. She met with the reporters at an event to support the Ronald McDonald House Los Angeles with her husband Jared Haibon.

“She’s just so likeable … She’s just pretty fantastic,” she told the outlet. “I don’t think anybody has met Tayshia and been like, ‘Eh, she’s just mediocre.’ Tayshia is a really good pick.”

Tayshia doesn’t seem to be concerned with finding love again. Her focus isn’t on love or even reality television at the moment. She previously told her Instagram followers that love isn’t on her mind right now.

Bachelor in Paradise alum doesn’t have love on the brain

The Instagram influencer has shifted her priorities. She’s been enjoying her new life since being on the ABC series. As Showbiz CheatSheet reported, Tayshia shares Instagram posts as part of her partnership with trendy clothing brand Boohoo. She also shares her travels with her followers. While most fans agree that Tayshia should become the next bachelorette, she revealed on Feb. 13 that she doesn’t have time for love.

Tayshia is also making time for her friends. She spent Galentine’s Day with some of her closest girl friends at her side. She definitely didn’t look lonely.

#ad Is there anything better than being with your best girlfriends on Galentine’s Day? 💖This year @SmirnoffUS helped me throw a #GalentinesDay party! Treating ourselves to facemasks, snacks and Smirnoff’s Zero Sugar Rosé Seltzer made for the best night ever! ✨🍿🍕🍫💃🏼💃🏾💃🏼

What are your thoughts? Do you think Tayshia Adams should become the next Bachelorette? Sound off below in the comments section.