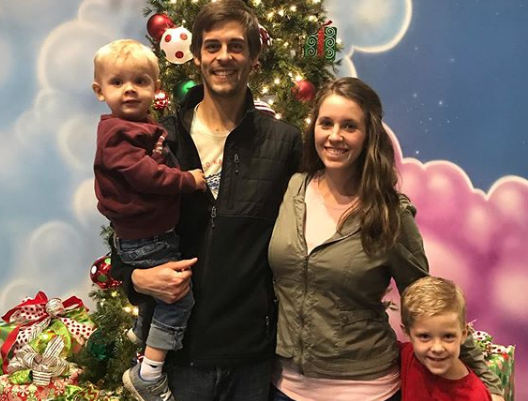 Derick Dillard of Counting On responded to a fan who asked how much they see his wife, Jill Duggar‘s family. He made it seem like it could be more than he’s previously stated, and his story seems to be changing.

As TV Shows Ace reported, Derick Dillard shared some photos on February 19th of Jill Duggar and himself on a Valentine’s Day date. A follower in the comments asked, “Do you ever see your family? Just curious.” He simply replied, “When we can.”

The couple had a romantic date on a budget for Valentine’s Day. After Derick got out of his law school classes, they had a simple date at a Waffle House. Jill had a surprise for Derick back at home. She had gotten him some treats of Hershey’s kisses, dates, olives, sparkling cider, and some homemade cookies.

The follower wanted to clarify if that meant his family or Jill’s, so they specified. “Jill’s sisters? And all her siblings? Because rumors say you don’t have anything to do with them. But I don’t believe a word.” Again, Derick replied, “Yes, we try to as much as we can.”

Not Being Allowed At The Duggar House Makes Meet-Ups Difficult

After sharing some photos from his family’s Christmas celebration in December, people were asking a lot of questions. His followers wanted to know how much they get to see his wife’s side of the family. His claims say that they try to spend time with them but it’s difficult. The couple is no longer allowed at Jill’s parents’ house when Jim Bob, her father isn’t there.

This response from Derick is very telling. It could mean that they wish they could spend more time with her family. But this isn’t possible with the restrictions in place from the Duggar patriarch himself.

According to InTouch, he even revealed that one of Jill’s sisters wanted her at the house when she was in labor. But before Jill could come over, she had to get permission from Jim Bob. He did add that there are no hard feelings in the situation, there is just more they are aware of now. He said, “The truth will always set you free.”

In January, another fan asked Derick Dillard is he still loves the Duggar family, he simply said yes. So does this mean they really would spend more time with them if they could? Could all of this drama been blown out of proportion?