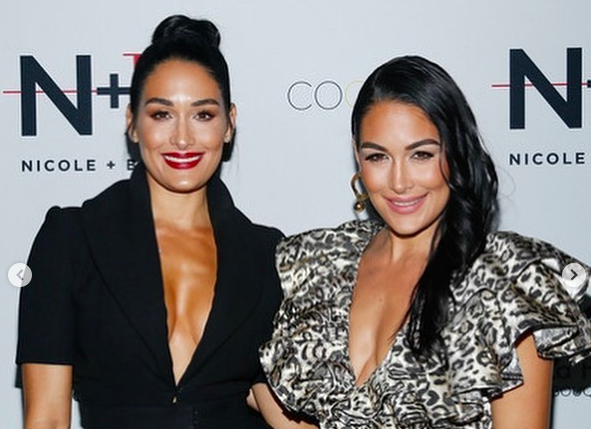 The Bella Twins were a professional wrestling tag team. The identical twin sisters performed on WWE. Now the sisters, Nikki and Brie, are setting the record straight when it comes to being pregnant together.

Last month, the twins surprised their fans when they announced that they were both pregnant and expecting within two weeks of each other. Talk about double trouble! TV Shows Ace reported on this.

According to Entertainment Tonight, some fans quickly speculated that the two sisters underwent in vitro fertilization in order to get pregnant together. Now, that would be some serious sisterly bonding.

The professional wrestling duo took to their podcast on Wednesday to respond to these shocking rumors. Not to our surprise, the sisters shut down the rumors on The Bellas Podcast.

Nikki Bella said, “You guys, it’s so ridiculous,” in response to the speculation. She continued saying, “Brie and I both did not do IVF … We did not plan on being pregnant together.”

She then went on to state, “This is the way the universe worked. God has a plan for it and I’m going on the ride with it, but there was just no planning here. We ain’t the Scheming Twins. You got the wrong girls here. They weren’t even planned pregnancies, let alone at the same time.”

This is the first pregnancy for Nikki, who’s expecting a child with her fiancé, Artem Chigvintsev. Additionally, Bella already has a 2-year-old daughter with her husband and fellow professional wrestler Daniel Bryan.

Earlier this month, Nikki and Artem co-hosted Entertainment Tonight and talked about how her pregnancy was a surprise. The duo even joked about the positive pregnancy test being Brie’s instead. The irony!

Nikki continued to explain that Brie had actually been trying for a second child with Daniel for eight months with no luck. But, then according to Nikki they “had fun one night and Brie got pregnant.”

Let us know what you think of the Bella Twins and their pregnancies in the comments below! And be sure to check in with TV Shows Ace often for more celebrity news and Bella updates.