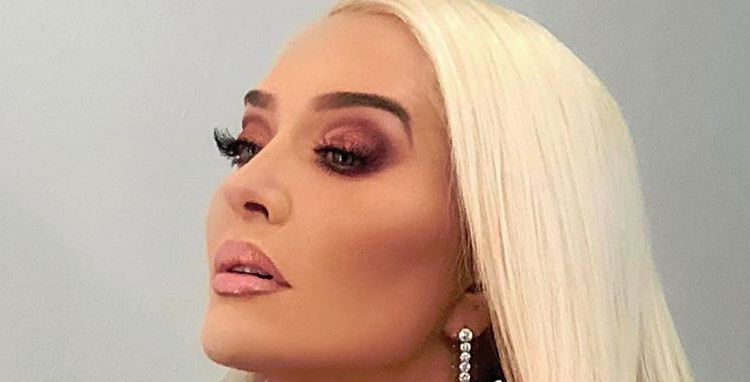 The Real Housewives of Beverly Hills star Erika Jayne took a break from appearing in Chicago on Broadway to stop into the Bravo NYC studios. Appearing alongside RHONJ star Jennifer Aydin, Erika sat down with Watch What Happens Live host Andy Cohen to dish all things Real Housewives.

WWHL has popular Q&A sessions with questions from fans and a superlative game. Both shed some light on how Erika feels about her RHOBH co-stars.

During the fan-asked Q&A session, one fan asked a question about Lisa Vanderpump, perhaps not realizing that the restaurant maven quit the show after Season 9. Andy began to explain that “unfortunately” Lisa wasn’t on the show anymore. Erika immediately chimed in with, “Is it unfortunate?”

This isn’t the first time Erika has made cracks about Lisa Vanderpump. TV Shows Ace reports that the XXPen$ive singer deemed her former co-star as “replaceable,” as they all are.

Erika Reveals Who Has Most to Answer For at RHOBH Reunion

Speaking of replaceable. Erika was asked by Andy which RHOBH newbie – Sutton Stracke or Garcelle Beauvais – made the best first impression. Erika answered, “Garcelle.” Fans noted that Sutton wasn’t included in a recent Bravo social media post about the one-on-one interview looks from the cast. They speculated that the party planner may only be in a part-time role.

Another question posed to Erika was which co-star has the most to account for at the reunion episodes. Not surprisingly, Erika thinks Denise Richards has a rough reunion taping ahead of her, TooFab reports.

As fans likely know, RHOBH alum Brandi Glanville is back in Season 10 for a handful of episodes. She alleges that she engaged in an affair with Denise and that Denise claimed to have an open marriage.

The Wild Things actress has remained mum about the affair. She did, however, recently use her social media to deny having an open marriage.

Erika took to her Instagram to share a photo of herself and Jennifer Aydin at WWHL. In the photo, Jennifer’s hand is casually resting on Erika’s stomach.

The caption to the photo says, “Secret’s out, I’m pregnant.” Followed by several crying-laughing emojis.

Secrets out… Im pregnant. 😂 Loved having fun with you tonight @jenniferaydin 😘😘🤣🤣

Several of Erika’s RHOBH co-stars and Jennifer replies with their own crying-laughing emojis. However, many fans congratulated Erika in the comment section.

The Real Housewives of Beverly Hills returns to Bravo later this year.