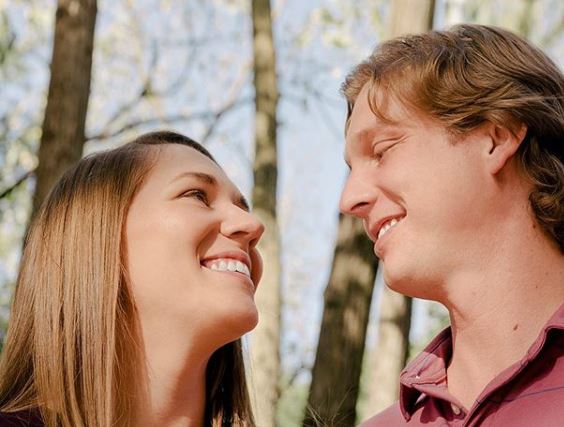 From the get-go of Married at First Sight Season 10, Jessica Studer and Austin Hurd were hands-down favorites for success.   They shared the same unspoken language of nerdy humor and homespun sincerity from their first champagne toast after taking their vows.  Things only got better on the honeymoon.  This Married at First Sight couple chose to keep their private business beneath the sheets, but Austin did tell his fellow grooms that he was leaving the island “a very happy man.”

Jessica Studer kept things confidential, never revealing too much during the communal dinners with the other couples, except to say “we’re adults” and let imaginations go from there.  Even before traveling back to Washington DC, Jessica Studer and her easy-going Austin talked about the big subjects.  As the pair walked through ancient religious ruins in Panama, they talked about mutually-shared benefits of raising their children with some roots in faith, and both spouses seemed on the same page.

In many ways, this Married at First Sight certainly appears to be ahead of the curve in communicating about topics that can become true problems of dissension between man and wife.  Showbiz CheatSheat reports on February 16 that Jessica Studer is “disappointed” over her husband’s income disparity.  Could her real concerns be related to something deeper than the dollars and cents?

Pastor Cal pushed Jessica and Austin on the matter of money

The most down-to-earth and honest Married at First Sight expert is Pastor Cal Roberson, and he got real very quickly with the newlywed couple during his visit on the February 12 episode.

Straight out, Roberson asked if Jessica and Austin had “started talking about who’s gonna pay the bills and how that’s going to happen?

Jessica described that there would be a joint account for housing and food.  Both partners affirmed that they “know how much each other makes.”

Pastor Cal got straight to the point and asked Jessica “How do you feel about his salary?” Jessica’s smile left in that instant as she answered: “Austin’s salary is much lower than mine, but it’s fine.”  She never let go of her husband’s hand.

Pastor Cal looked dubious.  Jessica insisted that Austin’s current salary wouldn’t be “forever.” The newlywed husband stridently jumped in, insisting that he wanted a “partnership.”  He further elaborated that he had no expectation of his wife putting in “more money, just because she makes more money than me right now.”

Austin is currently beginning an IT career, and Jessica gives her hubby kudos for motivation.

Before the subject of money arose, Jessica and Austin were disclosing their plans of “two to three kids in two to three years.”  In these times, that is a daunting goal for any young couple.

Jessica did mention the income disparity during a picnic lunch with her “sister brides,” however, in this week’s Married at First Sight.  The mere mention means that the topic is still stealing some of her focus.  Part of why this issue looms may lie in Jessica’s tendency for comparison with her twin sister.  Before her wedding, Jessica described a yearning for the milestones that Jennifer had already attained.  Even after a leap of faith like Married at First Sight, life goals can’t all come together at once. Backing up and seeing life and love with perspective is priceless.

Austin already passed the twin sister test of acceptance, too.

It’s that time of the week again. #MarriedAtFirstSight is starting now! You’re welcome 😜

During this week’s February 19 Married at First Sight, “Home Is Where Your Spouse Is,”  Jessica came home from her long shift as a nurse manager to a home-cooked dinner and a husband who offered to unload the dishwasher while she took a shower or did whatever she chose.

Despite describing the dish of quinoa and spaghetti as “edible,” Jessica did appreciate the effort.  One day soon, when her husband is an IT manager or supervisor, she may very well miss the times when he was home to make dinner or make the bed in the morning after she had left for work.

Austin shared that he had already experienced the tired, impatient side of his wife, too, and was still ready to give as much patience as required to keep the “team” intact.  He’s not allergic to running the vacuum cleaner, either.

Income is a momentary hurdle in life.  The willingness and heart to do what it takes in a marriage are treasures forever.