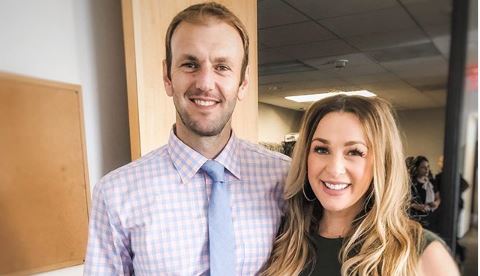 This week’s February 19 Couples Couch got an oversized and completely real peek into the real lives of the Married at First Sight Season 10 matrimonial matches as they settle into newlywed life in their Washington DC digs.  One couple, Mindy and Zach, are still not cohabitating due to Zach’s insistence that his “space” is more essential than saving any semblance of his marriage or his noble pledges on his wedding day.

Mindy’s loyal and ever-alert friends don’t let this groom off the hook for a second in the “Home Is Where Your Spouse Is” episode,  as reported by Newsweek, and neither do the seasoned, successful couples cozied up on Couples Couch.

Shawniece Jackson declared that she “loved this episode” because now is when the couples are truly tested to discover if what they share is grounded and real after the glamorous getaways of their Panama honeymoons and returning to the grind of work.  Along with her hubby, Jephte Pierre, Doug Hehner and Jamie Otis were settled in, as well as Anthony D’Amico and Ashley Petta and Keith Dewar and Kristine Killingsworth, who decided to dress for the occasion.

Kristine Killingsworth and Keith Dewar are always a joy to watch on Couples Couch. They remain sweetly affectionate with each other, just as they were in their Season 8 journey to forever love in Philadelphia.  For whatever reason, the sweeties chose to wear their animal and amphibian “snuggies” on this Couples Couch.  Kristine looked like a little koala in her grey suit, and hubby was either a frog or an alligator– it was hard to completely tell.

The Philly pair was delighted when Meka and Michael started sprucing up their Married at First Sight place to welcome family and friends, and the communication led to a decision to wear their wedding bands once more.  Kristine cautioned that “you should’ve never took ‘em off, but I’m glad you put ‘em back on!”  Meka admonished her husband that the entire significance of a wedding ring is not to “take it off when things are bad or difficult,” and he concurred.  The two were not too cozy when they were buying spices at the shop, but when they left their walls down while playing games with their guests, they gave a glimpse of what they could be as a couple– so refreshing.

Jamie Otis and Shawniece were shocked by how Derek and Katie almost seemed to be searching for reasons to find their partner “less than” their perfect match.  Katie now seems consumed by Derek declaring that he doesn’t think he can fall in love by eight weeks together.  During lunch with her mom, Katie was in tears, feeling that perhaps she gave up love with her ex for the chance with Derek and a forever partner.  Her mother shared from her own experience and cautioned her daughter against “always looking for better.”  The Couples Couch unanimously sided with mom, and nearly every veteran bride said to just let life be natural, take its course, and “make memories” as Derek’s friend suggested.

Derek said he was looking for “those moments” of certain love with his wife.  Real moments between couples are much more like slow-burning sparklers than dazzling fireworks. Derek will come to know those feelings as love. Everyone loved Derek’s dad and his advice, too. Jamie couldn’t believe how badly Katie treated her mom.

Katie also shared a point of complaint about her husband’s bathroom announcement “specifics.” This behavior may not be to her liking, but Katie is certainly not alone.  An entire discussion of the topic ensued on the Couples Couch.

Doug Hehner insisted that “once you pee and p**p in front of each other, the mystery is gone.”  Perhaps he’s right, but there’s a lot to be said about being comfortable with each other, too.

Katie did credit Derek for “being very sweet to me” and other good qualities.  They went to sleep head-to-head, so let’s hope they are holding onto good things.

The fan club is still going strong for Jessica and Austin, and their friends seem to be celebrating their match, too.  The couple set up a table for beer pong at their get together and Jessica teased that she “carried the team.”

Austin has really pitched in on the domestic duty front.  He vacuumed the place for the party, and prepared dinner—spaghetti and quinoa, with veggies—for him and Jessica after her long shift. He admitted to friends that he had seen his wife’s tired and impatient side, but reality had not dimmed his passion or commitment to their union.

During a picnic lunch with the other brides, Jessica did mention the salary differences between her and her husband.  The Married at First Sight expert, Pastor Cal Roberson, pushed the couple on this issue during his visit.  The situation didn’t please Jessica, but she praised that “the kicker is, he’s very motivated,” feeling certain that advancements and more income would come for Austin in the future.  Austin is currently a go-getter at home.  He shared with everyone how he never forgets to make the bed.  Jamie Otis and other Couples Couch wives were dumbfounded by that devotion.

‘Couples Couch’ gets invited to the grilling for Brandon and Zach

Brandon Reid seemed to be doing all he could to own up to his behavior with the Married at First Sight production crew and his bride just before their return from Panama.   Mindy verified that he had personally apologized to her and the other spouses at the wives’ picnic.  He made a pledge to “be a better Brandon” renewing his vows in front of Pastor Cal.

Taylor tells her friends to “go lightly” on her husband, and that they have set the “reset” on their relationship.  None of that easy-treading is obvious at their family get together.  “Brandon is terrified!” exclaims Jamie Otis, as her husband portrays Brandon’s expressions with a pillow.  Thank goodness for his aunt’s defense, because otherwise Taylor’s dog would have done more than constantly take to the new husband’s leg. It seemed as though the entire afternoon was spent in an inquisition.

Taylor kept saying she didn’t want Brandon just to go into “whatever you want” mode, but she continued bringing up his indiscretions.  She already had divulged much more than necessary to her besties, too.  Ashley Petta was particularly insistent that “enough is enough.”  Taylor and Brandon took the wrong bus for the wrong reasons to Married at First Sight and the Couples Couch sees it, too.

Moving on to Zach and Mindy, the only thing Zach seems to be doing right is letting his two dogs take over in his painfully sad exchanges with Mindy.  He should take a lesson in warmth from his canines because his ridiculous “play date” meet-ups with his wife are excruciating to witness.

Zach proudly showed off that he was wearing his ring, insisting that he had “cleaned it.”  Why? He’s only worn the trinket (to him) a total of two hours.  When he defended that he was committed to working on their “friendship,” Mindy reminded him “we’re married.”

Mindy friends gave it to Zach, asking how he liked the place “where you never live.”  No one has any tolerance for his “pretty words.” Ashley interjected that “they’re not pretty if they don’t mean anything,”

Maybe it’s a metaphor that the Couples Couch saw Zach topple the block tower at their get together.  His marriage is likely toppling, too.  “The only one he’s attracted to is himself,” Jamie Otis concluded.

The domestic seas turn rougher next week for the couples.  See who rides the waves and keeps afloat next week on Married at First Sight on Wednesday, followed by Couples Couch on Thursday on Lifetime.

‘DOOL’ Week Ahead Spoilers: Allie Comes Clean – Gwen & Xander Scheme
J. Lo Assassin Action-Thriller ‘The Mother’ on Netflix: What We Know So Far
Chase Chrisley Likens Father Todd To A Tornado, And Here‘s Why
‘The Masked Singer’ A Kardashian Family Member Joins Group B
‘Welcome To Plathville’ Preview: Will Olivia Stay Or Go?