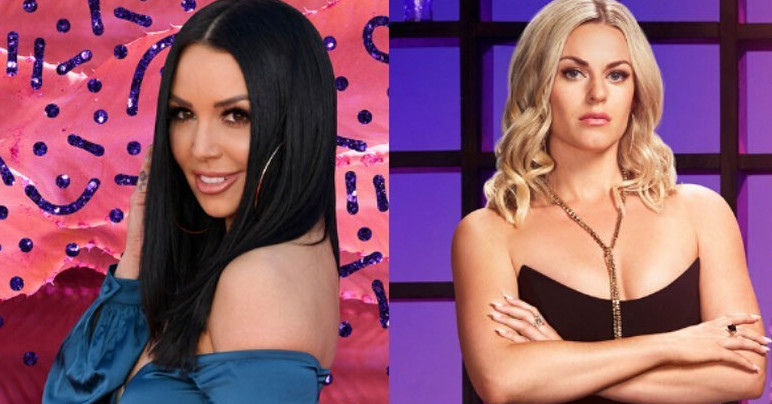 Dayna Kathan is one of the newbies joining Vanderpump Rules for Season 8. The sometimes-model actually made a random appearance in Season 7 when SUR manager Peter Madrigal brought her back to the room during a guys’ night out. During the premiere episode, she denied hooking up with Peter that night.

However, she definitely hooked up with co-star Max Boyens. On the latest episode of VPR, the TomTom manager tells Dayna that he wants them to be exclusive, but he seems to deny saying that in next week’s episode.

Fans aren’t really fond of Dayna and neither is co-star Scheana Shay.

Scheana had a brief fling with Max before Season 8 began filming. Needless to say, the Good as Gold singer isn’t handling her ex moving on to a new woman, let alone someone she works with.

Scheana and Dayna have butted heads throughout the show’s first few episodes. However, they seemed to have buried the hatchet during the Pride parade event. Yet, Dayna spends the majority of the latest episode bashing Scheana to Stassi Schroeder and the other girls in the cast.

So maybe that hatchet isn’t buried anywhere except in Scheana’s back.

On a recent episode, VPR co-star Danica Dow tried to warn Dayna about Max’s f**kboy habits. According to Danica, Max hooked up with and ghosted another SURver before hooking up with Dayna. However, Dayna brushed off the warnings and chose to give Max a chance.

Things with Max and Dayna seem to go south next week when Max tells Katie Maloney that he was “tired” when he asked Dayna to be his girlfriend. Spoiler alert: Dayna wises up and gives  Max the boot. Hopefully. Fans will have to watch to see how it goes down.

However,  sources report that things are not great with the former couple. Dayna says,

“He and I have been through a lot in the last six months or so, and right now, we’re coworkers. And that’s it.”

VPR’s Dayna Kathan is Single and Ready to Mingle

The SUR and TomTom employee reveals that she is ready to date again after her heartbreak with Max. And she’s open to dating men or women. Dayna bonded with Vanderpump Rules co-star Ariana Madix at the Pride parade over their bisexuality. In fact, Dayna used the event as an opportunity to come out.

resting bitch face because i was nervous meeting one of my fav celebs, who knew who i was because she watches so much @bravotv 🤯 wtf is life??? chrissy is every bit as lovely as you would imagine her to be. congrats on your @quayaustralia launch, babe!!!!!

Fans can see how Dayna and Max end their hookup as the season continues. Vanderpump Rules airs Tuesdays on Bravo.