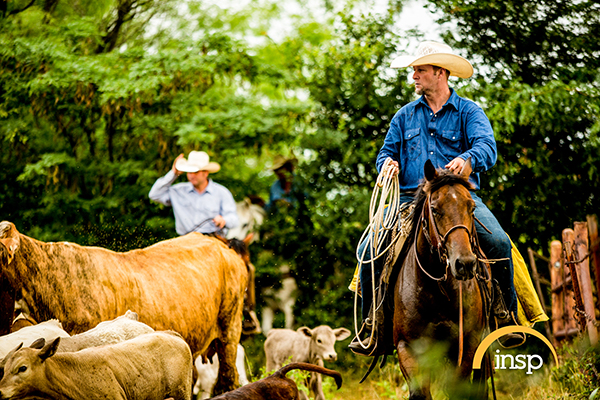 TV Shows Ace recently got the chance to interview Bubba, Cody and Booger from the show The Cowboy Way on INSP. Bubba and Cody were both on CMT’s hit show Sweet Home Alabama in the past.

What made you decide to do reality TV again (after appearing on Sweet Home Alabama)?

Cody: It was a good opportunity to network and meet different people while also promoting my business.

Bubba: It was an awesome opportunity to work for the same producers again and show our lifestyle to a wider audience. It was also a chance to show people you can have a TV show and still be humble.

What can fans expect from the show?

Bubba: We’re currently on the 6th season of the show, and not many people can say that. We want to show that there are still hard-working people out there.

Booger: Viewers will see the trials and tribulations that come with the ups and downs of life, but they can also expect big action, and they’ll get to see how our families are doing.

Did you change anything about how you do things day to day with the show being filmed?

Cody: Let me put it this way, if you have a job that should normally take 20 minutes, it can take 8 hours when you’re filming. It all makes you appreciate your family because it’s hard to spend quality time with all the working hours. Between filming, the business and being a husband and a father, it’s like I’m working three jobs.

Bubba: Everything changes! Some jobs we have to put off for filming, and other jobs we have to prioritize because they may be easier to film. We continue working after the cameras stop rolling to finish some jobs we weren’t able to do while filming.

What made you agree to a reality show?

Cody: I don’t think I could have done it for any other network besides INSP. I like that they stand for good, wholesome entertainment, and I know my two year old, Carter, can watch without me worrying about the content.

Booger: This show has changed my life! I’ve had a passion for this lifestyle since I was a little kid, and now we are showcasing this lifestyle for a greater audience to learn about. It’s awesome to put that out for everyone to see.

Do you feel like your business expansions are going well since the show?

Cody: Because of the show, I’ve found that people have sort of adopted us into their family, and they want to do business with me because they feel as if they know me. Since being on the show, my company has grown three-fold.

Booger: Definitely! I was invited to compete in the prestigious Road to the Horse competition, and season six follows my training for the event. I grew up watching Road to the Horse, and to be a part of it, was really something special. I’m really excited that they have asked me to come back again this year as Fan Host, and I can’t wait!

Any chances of another season of The Cowboy Way?

All: Yes! Season 7 is going to air this spring, so stay tuned.

Make sure you don’t miss new episodes of The Cowboy Way on Wednesday nights on INSP.