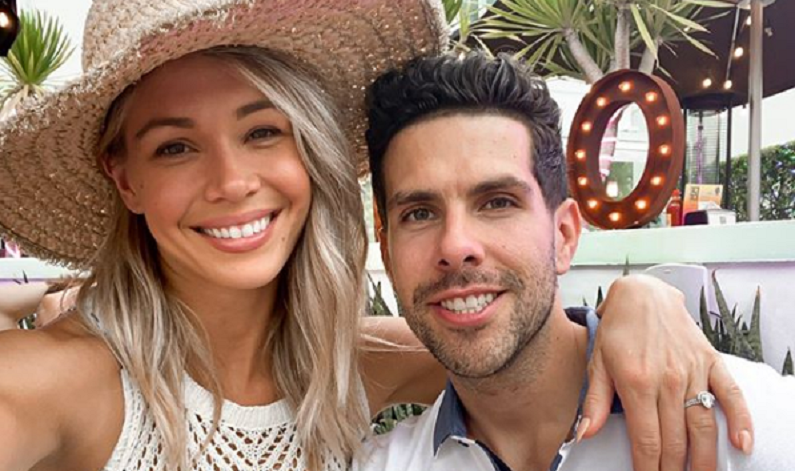 Krystal Nielson opened up on her “conscious separation” from Chris Randone. Bachelor in Paradise fans were shocked when the couple announced their split earlier this week. Of course, it is never easy to see any couple break up – especially those from Bachelor Nation. While the couple seems happy about their split, they don’t know what the future holds for them. Just days after they announced their separation, Krystal is giving more details. She told fans that they have been in talks over their difficult decision to go their separate ways.

The 32-year-old shared a photo of herself with Chris in happier times on Wednesday, February 19. In the post, she explained that she just FaceTimed him the night before. Despite their split, the couple has had a heavy discussion about their future apart, as reported by E! Online.

Krystal Nielson said that she does not regret her time with Chris. She admits that their few years together were “surreal.” Both of them felt that it was the right decision to go their separate ways.

“We knew that taking a ‘conscious separation’ would be difficult to explain to all of our supporters, friends and fans.. and we knew of the potential tabloid frenzy that would incur,” Krystal continued, “but we care so deeply about one another that we were willing to take the risk, as WE feel that this is the right move for US.”

Thank you to everyone for your support as Chris and I navigate this new chapter. We FaceTimed last night and were talking about how surreal the past couple years have been. And how LUCKY we are to have found one another. We knew that taking a “conscious separation” would be difficult to explain to all of our supporters, friends and fans.. and we knew of the potential tabloid frenzy that would incur… but we care so deeply about one another that we were willing to take the risk, as WE feel that this is the right move for US. We weren’t planning on saying anything until we had actually processed what this new “chapter” actually IS… but media outlets started reaching out to friends, family, and other cast members with crazy rumors so we felt that we needed to make a statement from US. Were we ready? No. Did we feel pressure? Absolutely. Does it hurt to hear and read comments and judgments? Deeply. But we are choosing love and compassion over anger and fear. We know that this isn’t conventional and people are absolutely entitled to their opinions- but we’ve realized how much we have stunted our growth bc of the fear of disappointing and “failing” others- and therefore neglecting what WE need to thrive. For me, this stems all the way back to my childhood and the need to please others in order to feel worthy of their love and acceptance. But living a life to please others will only leave you empty and full of regrets. Chris left Saturday morning to begin an exciting adventure in Florida and I am so proud of him for making big moves. I am still here in San Diego with Wayne and Chucky and we are open to where our heart calls us to be next. In the past I’ve turned to bad habits to numb out the pain… but I now know, after extensive personal development this past year, that these pain bodies only harbor in us and continue to fester at a later time in life. And it’s not until we deal with it head-on that we can evolve, grow and become a better human being and soul. So we are both staying present, sitting in stillness and focusing on radical self care, as we come from a place of love and compassion on how we can BEST support each other. Thank you , we love you.

She also said that Chris left on Saturday to “begin an exciting adventure in Florida” and that she was “so proud of him for making big moves.” As for Krystal, she will stay in San Diego with her beloved dogs, Chucky and Wayne. She said that she’s excited about the future ahead.

While she is aware that this split “isn’t convention,” she feels that they “stunted” their growth by staying together. The couple had a “fear of disappointing and ‘failing’ others,” and they ignored their “need to thrive.”

That’s not all she said. Krystal Nielson also addressed their shocking separation on her Instagram Stories. She revealed that she feels like she’s been “in this daze” for the past few years. Krystal couldn’t get a grip on the real world since being on reality TV. She even shared a photo of her FaceTime session with Chris that showed him in a happy moment, as reported by Us Weekly.

Since this was Krystal’s “first public relationship,” she clearly didn’t know how to navigate it. Chris and Krystal met and got engaged during Season 5 of Bachelor in Paradise. In the next season, fans saw the couple exchange vows during their June 2019 wedding. Krystal said on her Instagram Stories that she felt fans were constantly “watching” her life with her husband.

The ABC host was the one to officiate the couple’s wedding. Now, Chris Harrison is breaking his silence on their split. He told Us Weekly that the news was “heartbreaking” to hear. According to Chris, the couple “fought really hard” to make their marriage work.

“I love them very much. They’re good friends, and I know that from the start, they were two people that were definitely going to fight the odds to make it just because of the things they brought into this relationship.”

What are your thoughts on Krystal Nielson and Chris Randone’s “conscious separation”? Are you also heartbroken over the news? Sound off below in the comments section.