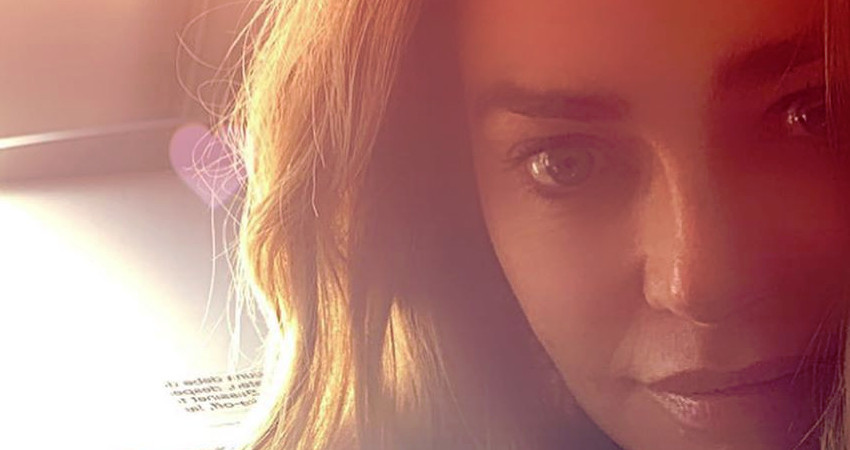 The Real Housewives of Beverly Hills fans are still waiting for an airdate for Season 10. The rumors of a boring season gave way to a shocking claim by Brandi Glanville of an affair with RHOBH star Denise Richards.

Unfortunately, Andy replied that the RHOBH trailer is at least a month away, if not longer.

Omg you have another month or more for that one

However, after months of remaining mum, Denise is finally dropping hints about the state of her marriage.

The cusp of the Brandi/Denise affair rumors hinge on the allegation that Denise assured Brandi her marriage to Aaron Phypers was an open one. Brandi alleges that the former friends had a months-long relationship with, she thought, Aaron’s consent.

Whether the affair happened at all and what Aaron did or didn’t know will likely play out on Season 10.

The exchange began when the Wild Things actress posted a series of photos of her husband filming something at his health clinic, Quantum 360. A fan named Bridget asked if Aaron has a brother, Reality Blurb reports. One of Denise’s social media followers responded with a claim that the fan should go to the clinic to, presumably, hook up with Aaron.  The follower wrote,

“They have an open marriage Bridget so maybe you could swing by the clinic sometime.”

The comment drew Denise’s attention. She quickly shut down the rumor by saying they don’t have an open marriage.

The follower who implied they do apologized. Denise took the comment and apology in stride, but doubled down on the state of her marriage.

The Bold and the Beautiful actress wrote, “absolutely not” to the suggestion of an open marriage. She used a 100% emoji to explain her marriage.”100% monogamous to my husband,” Denise confirmed.

Days before Denise celebrated her 49th birthday on February 17, the couple celebrated Valentine’s Day. Denise posted a throwback to their wedding day, captioning the black and white photo with the hashtag #strongertogether, TV Shows Ace reports.

Aaron shared a different black and white photo of the newlyweds. The photo shows the couple smiling at the camera while cuddling. He wishes his “beautiful wife” a happy Valentine’s day.

Happy valentines to my Beautiful wife . Love you baby @deniserichards

Despite reports of a strained marriage, their social media posts are positive and affirming their love for one another.

Brandi Glanville is not one to shy away from criticism. The former model prides herself on being truthful and upfront, regardless of how much trouble it lands her. The former RHOBH star is quite active on Twitter, engaging in discussions with fans and famously Drinking and Tweeting.

Throughout the rumors of drama with Denise, Brandi has teased her followers with tidbits about the alleged affair. She claims to have proof, but also claims that she can’t speak about the situation directly.

As a result, her followers have started to wonder if she’s telling the truth about the affair. Brandi took to Twitter to assure fans that she isn’t lying. She promised that everything will be out in the open soon.

I just want to make it VERY CLEAR that IM NOT LYING about any statements I have made recently all will be revealed soon enough. ❤️🙏

While Brandi left the Bravo hit a few seasons ago, she is back for brief appearances in Season 10. Bravo has yet to announce when the new season of The Real Housewives of Beverly Hills will air. Keep an eye on TV Shows Ace for updates.