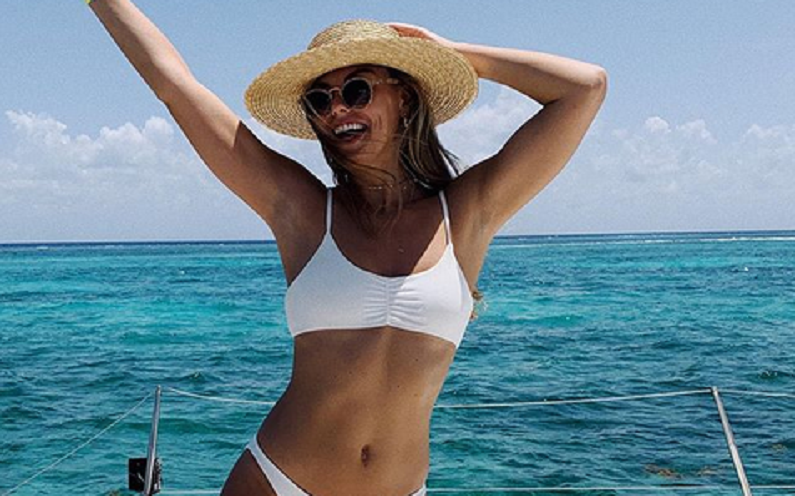 Hannah Brown is single and ready to mingle. The Bachelorette alum wants to give love a second chance. But she’s already having trouble with the dating world. This comes after Hannah B. revealed that she is her own Valentine this year.

It turns out that she’s already striking out in the online dating world. It’s more stressful than dipping into the Bachelor Nation dating pool. She admitted that she “can’t get” on a certain dating app. In fact, Hannah has been on “the waiting list for months.” Do they know who she is? Read on to find out more.

Bachelorette is striking out in the online dating world

As Life & Style reported, Hannah Brown is not doing well with online dating. She “can’t get” on Raya, which is an online dating app for A-listers and reality stars. It’s like Tinder, but for rich people. Raya boasts an impressive list of celebrities like Ben Affleck, Charlie Puth, Demi Lovato, and Skylar Austin. So, it’s no surprise that Hannah would want to get in on the fun.

The ABC star joked that she should probably try Christian Mingle, but then said she “might not be allowed” on there after her infamous windmill scene with Peter Weber. Instead, she’s been waiting to get on Raya for months. The long waitlist doesn’t mean that Hannah has been rejected.

“Application’s decisions can range anywhere from a day to a few months,” the app’s official website states.

The waitlist is “based on algorithmic values and input from hundreds of members of the committee spread throughout the world.” Since Hannah has struck out with online dating, she could become The Bachelorette again. Theories have been tossed around by Bachelor Nation. However, not everyone is on board with the idea.

Should Hannah Brown become The Bachelorette once again? Her last time on The Bachelorette involved two key people: Jed Wyatt and Tyler Cameron. She fell for Luke too, but she didn’t realize how awful he was until he made it to the final four. Then she found out who he really was and sent him home packing. She ultimately chose Jed until she found out that Jed was in a relationship and she ended their engagement.

Since her last search wasn’t successful, she should be given another chance. If she’s single like she says she is, then ABC should make her the next Bachelorette. Who doesn’t want another season of Hannah Brown? Well, some people in Bachelor Nation are not here for it.

Bachelor in Paradise alum Ashley Iaconetti said that she would “love to see Hannah be the Bachelorette again in a couple of years.” She feels it’s “too soon to repeat now.” Instead, she would love to see Andi Dorfman or Clare Crawley fill that role. Bachelorette alum Lesley Murphy shared similar sentiments in another interview.

Spent Valentine’s Day with her friend at Disneyland

As Inquisitr reported, Hannah celebrated her single life as she posed with her best friend at Disneyland on Valentine’s Day. In a slideshow on Instagram, Hannah posed with writer Elyse Murphy at Disneyland California Adventure Park. The friends are seen smiling in a heart-shaped cutout to celebrate the romantic holiday. The pals are also wearing matching striped shirts that feature Micky Mouse print.

sisters before misters. uteruses before duderuses. ovaries before brovaries.👯‍♀️ the most magical way to spend Valentine’s Day! 💗

The other photos show them wearing matching red-and-white polka dot onesies that feature Minnie Mouse ears and sunglasses. It’s a seemingly wholesome trip. In the caption, Hannah joked that she puts “sisters before misters.” She also said that Disneyland is the “most magical way” to celebrate Valentine’s Day. It looks like she’s happy with being single.

What are your thoughts? Do you think Hannah Brown should be The Bachelorette again? Sound off below in the comments section.