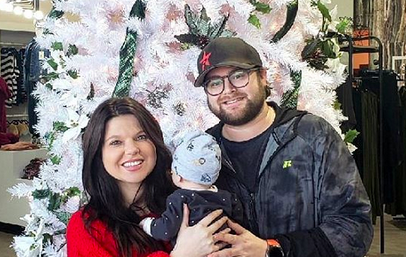 Amy King is a cousin of the Duggar kids. She’s chosen to make her own name for herself and claims she doesn’t use the family name for fame, as reported by TV Shows Ace.

Because she’s a cousin of the famous reality TV family, she has gained a lot of followers on social media. She currently has 409,000 followers. So, whenever she posts on social media, she gets a lot of attention. Duggar fans and others like to follow Amy to see what she’s up to.

Amy is married to Dillon King, and they recently had a son, Daxton. He’s four months old. Amy’s Instagram page is filled with posts about her son. And, her social media followers are obsessed with the baby. They think he’s adorable.

As mentioned, Amy has proved that she isn’t quite like the rest of her family. For example, the Duggar kids get married and start having kids at a young age. Amy and Dillon were married for a few years before starting their family.

Just because Amy doesn’t seem to be in a hurry to have a lot of kids doesn’t mean fans don’t wonder if she’s pregnant. But, a recent post led to some confusion surrounding a possible pregnancy.

For Valentine’s Day, Amy shared a new post on social media. Most people post a picture and sweet caption dedicated to their loved ones, so Amy did the same.

She shared a series of pictures. In her caption, she wrote, “So tonight is pretty special for the two of us.. last year around this time we found out we were pregnant. What a surreal moment! I love our love story babe… thank you for giving me the best present of all!” Amy says that the photos capture their “pure joy.”

In a couple of the photos, Amy is holding a pregnancy test. The other ones are of herself with Dillon.

Followers wonder if Amy is pregnant

In the comments section of Amy’s post, some of her followers were very confused. They seemed to think that she was announcing another pregnancy. Some congratulated her. Someone also said that it was great that Daxton and the new baby would be so close in age.

What these followers didn’t realize is that Dillon and Amy were reminiscing about last Valentine’s Day, which is when they found out they were expecting Daxton.

Some Duggar fans started commenting and encouraging the followers to start reading the caption. It seems that some of them simply looked at the pictures, saw the pregnancy test, and thought this post was an announcement.

So tonight is pretty special for the two of us.. last year around this time ⁰we found out we were pregnant. What a surreal moment! I love our love story babe… thank you for giving me the best present of all! #daxtonryanking 》 swipe to see what pure joy looks like!

Of course, there is a chance that Amy is pregnant, but most fans think it’s unlikely. She will likely wait a little while to have another baby. Fans agree that this post is cute, but it’s definitely lot not a baby announcement.

What do you think of the pictures? Did you think Amy was pregnant again? Leave a comment below.