If you’re a fan of the Duggars, you might know that Carlin Bates is best friends with Joy-Anna Forsyth. The two have been friends for a long time. They’ve been there for each other through all the ups and downs of life.

When Joy-Anna tragically lost her daughter at 20 weeks gestation, Carlin did her hair and makeup and set up a special photo shoot to honor the lost baby, Annabell Elise. They were a part of each other’s weddings too. They seem to be sticking by each other’s sides through it all. Both of them interact with each other on social media often.

We only had her for 20 weeks, Life is fragile and precious. So thankful the Lord gave her to us for that short time! She will be in our hearts forever!💝😇 . Thank you all for your love and support! We can feel the prayers!💕 . Thank you, @carlinbates98 for coming to town to be here for me and for doing my hair and makeup for pictures with our little girl!💖

Now, as TV Shows Ace reported, Carlin recently became a mom. She and her husband Evan Stewart had their first baby girl, Layla Rae, on January 31. TV Shows Ace has also reported that the couple are sharing all kinds of pictures of the baby girl. Carlin also shared pictures from the baby girl’s birth.

But, Joy-Anna had yet to meet her bestie’s baby. Well, it looks like that time has come.

On Sunday, Joy-Anna revealed that she was finally getting to meet her best friend’s baby. When she arrived at Carlin’s home, she shared a picture of the baby girl and said she is perfect. 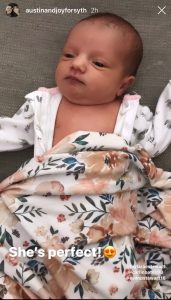 Carlin also shared a picture of Joy-Anna holding her baby. She seemed excited to have her friend there to meet Layla. Duggar and Bates fans are hoping to see more pictures of Joy-Anna and Carlin together. They love the friendship the two of them have! 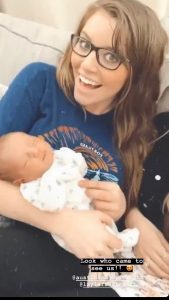 When Layla was born, Joy-Anna shared a picture of Carlin, Evan, and Layla in the hospital. She wrote a heartfelt caption and ended it, saying, “Can not wait to see you in a couple of weeks!😘❤️” So, it seems that they have been planning this for a while.

The baby was actually due in mid-February. Due to a blood-clotting disorder that Carlin has, the baby was delivered early. So, it’s possible that Joy-Anna was planning on visiting right after the baby arrived. But, since the baby was born a couple weeks early, Joy-Anna had to wait to meet her.

Congratulations to my best friend on your new baby girl!💖😱😍 She is perfect!👶🏼 (And you don’t look like you just birthed a human! 🤯😉) • I loved hearing you talk about the anticipation of meeting Layla Rae, and now seeing you hold her makes my heart so happy… the love that you both have for her radiates through you!! You and Evan are already such great parents! Can not wait to see you in a couple of weeks!😘❤️ @carlinbates98 @evanpstewart16 @laylaraestewart

Where do Joy-Anna and Carlin live?

On her Instagram stories, Joy-Anna revealed that she had an early flight. She also shared a snap of herself drinking an iced coffee on the plane. So, Duggar fans know that Carlin and Joy-Anna don’t live too close to each other. 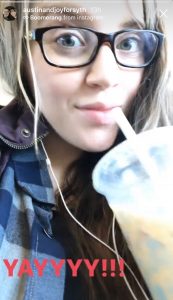 Joy-Anna lives in Arkansas with most of the Duggar family. The Bates family lives in rural Tennessee. According to Romper, Carlin moved to Nashville to be with her husband, Evan. At the time, she said, “I’m super excited about starting a home with him there, but I am also glad it’s still in Tennessee and very close to my family.” The move was mostly for Evan’s job.

In Joy-Anna’s posts so far, she has yet to reveal whether her husband Austin and son Gideon tagged along on the trip. The flight from Arkansas to Nashville is nearly four hours, so it’s possible that Joy-Anna went on this trip solo. Because of this, she might stick around in Nashville for a while.

What do you think of the pictures of Joy-Anna meeting baby Layla? Leave a comment below.