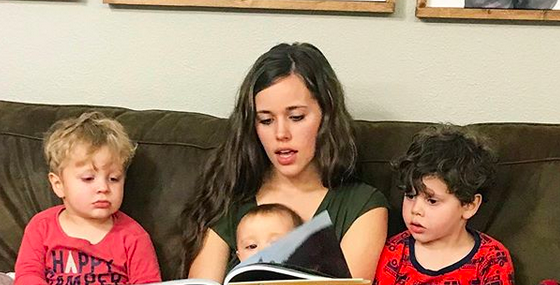 From what fans can tell, Ben and Jessa Seewald had a great weekend with their family. The Duggar daughter and her husband have three kids together, Spurgeon, 4, Henry, 3, and Ivy, 8 months. On social media, the parents share frequent updates of their growing kids. Of course, Duggar fans love to see anything they have to share. And, they especially like seeing new pictures of the kids. Fans have noticed how well the young children seem to get along.

Happy to have some time with my parents this weekend and share in a little belated birthday celebration for Henry. . I’d forgotten how much fun Playdoh could be. 👨🏼‍🦳

Throughout the week of his birthday, Jessa and Ben gifted their son a present each day. This is something new that the family decided to try out this year. Unfortunately, Duggar fans paid less attention to the fun tradition and more attention to the unwrapped gifts, as reported by TV Shows Ace.

In a new Instagram post, Jessa revealed that her kids all love to read. She previously shared about Spurgeon enjoying reading too. The four-year-old was photographed on a chair with a stack of books beside him. Fans of the family absolutely loved the cute picture.

In her newest post, she shared a picture of each of her kids reading. She says that their love of books “runs in the family.” In the picture featuring Henry, several of Ben’s family members are reading with the three-year-old.

Fans think it’s great that Jessa is already encouraging her kids to read. They are saying that it’s good that she’s supporting a lifelong love of learning. Even Ivy seems to love reading.

The love of books. 📚 It runs in the family. 💞 @seewaldfamily

Henry is caught drinking orange juice from the jug

In a funny video, Jessa reveals that the Duggar grandson is caught drinking orange juice straight from the jug. She shared that Ben’s mom is the one who saw it all happen. Luckily, she was able to catch a video of it.

Duggar fans are impressed with Henry. In the comments section of Jessa’s video, her followers are saying that Henry is a smart boy. They are also saying that it’s great that he doesn’t spill any orange juice on himself in the video.

One of Jessa’s followers said, “You are going to have to keep a close eye on this one!! 😂😂“. Another said, “He’s was looking around before he started drinking to see if anyone would see him 😂😂😂😂”. Someone else writes, “Oops! Next time he needs a lookout. 😉 So cute!”

What do you think of Jessa and Ben’s family’s weekend? Do you follow them on social media for updates about their family? Leave a comment below.

For more updates about the Duggar family, follow along with TV Shows Ace.