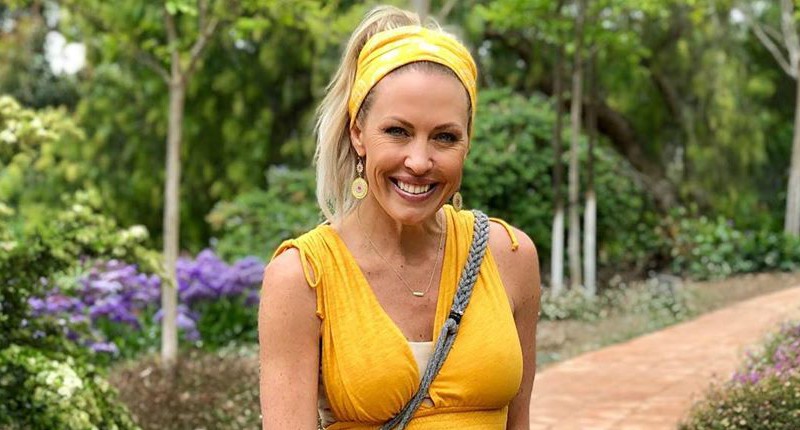 The Real Housewives of Orange County newbie, Braunwyn Windham-Burke is all about her family. The full-time housewife is raising seven children with her husband of twenty years, Sean Burke.

With children ranging between teenager to toddler, Braunwyn has her hands full. In addition to three teenagers (Bella, 18; Rowan, 17; Jacob, 14,) the blogger has 6-year-old twins, Cayden and Curran. The RHOC star opened up about Curran’s medical problems earlier this week on Instagram.

In a social media post gushing about her son’s “heart of gold,” Braunwyn shared a shocking detail about her young child. Curran has a medical condition called Nystagmus which affects the eyesight.

According to People, Curran underwent surgery two years ago to help him see better for the first time. Prior to the surgery, the reality star says the boy’s twin brother helped him navigate the world.

However, after the surgery, Curran was able to find his own way around. Braunwyn recounts,

One of my best ‘mommy’ moments was when he opened his eyes 3 days later, ran around the house showing me everything and then finally put his hands on the side of my face and said ‘wow Mommy, you’re so pretty,’ ”

A Second Surgery Later This Year May Help

Legally, Braunwyn’s son is considered blind. But this doesn’t stop him from playing or even skiing, she shares. She is hopeful that another surgery in a few months will enable him to live independently as an adult. She writes,

Although he’s still legally blind you’d never know it, and this Spring he’ll have another surgery that’ll hopefully bring his vision to where he can drive one day.”

The Real Housewives of Orange County star praised her son’s positive attitude. She also said how proud she is of her son.

Braunwyn Confirmed RHOC Return; Find Out Who Else is Back for Season 15

Viewers will see more of Braunwyn’s kids and mother, Dr. Deb. The RHOC star seemingly confirmed reports that she was asked back to the Bravo show for a second season.

As fans know, the cast of RHOC is changing drastically for the show’s upcoming Season 15. Longtime housewives Vicki Gunvalson and Tamra Judge both chose to leave the show rather than take on a reduced role.

An air date for The Real Housewives of Orange County hasn’t been announced yet. It is expected to return to Bravo later this year.

Zach & Whitney Bates’ Baby Heads To The NICU – Is He Okay?
Is It Too Late For Jill & Jessa Duggar To Sue Josh For 2002 Molestations?
Adam Busby Takes Quints Shopping For Vera Bradley Lunchboxes
Candace Cameron Bure Has A Good Day With Messy, Unkempt Bed Head
‘OutDaughtered’ Adam Busby Shares His Secret Ticket To The Gun Show