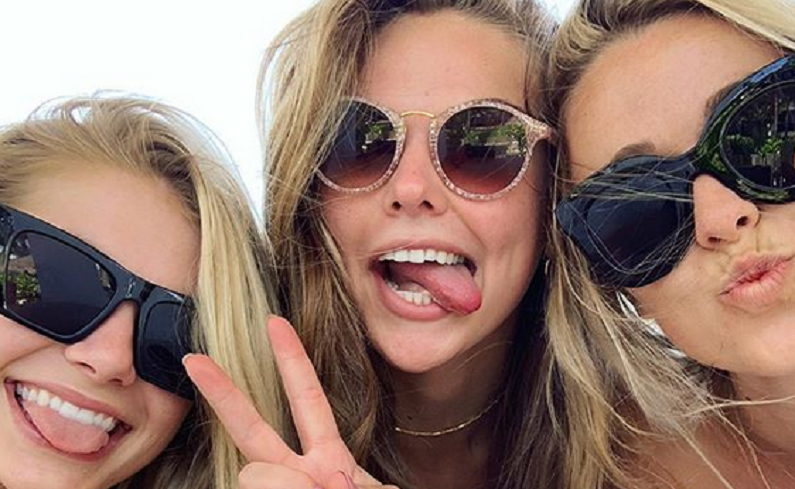 Hannah Brown has found a new way to insert herself in the Bachelor drama. This season is filled with its share of drama. The show also can’t seem to get rid of Hannah Brown. She wants to be a part of the Bachelor franchise. Even though Hannah is not in this year’s competition doesn’t mean she doesn’t have feelings about it.

It makes sense since her ex Peter Weber is The Bachelor. Some people thought Hannah should have returned to the mansion. Others want her to return for a second time as a Bachelorette. But, most of Bachelor Nation want Alabama Hannah to go away. Well, she’s not going away anytime soon. Instead, Hannah is making her feelings known about the new season.

She’s stretching out her fifteen minutes of fame. Hannah Brown is currently on the Dancing with the Stars tour. But, that hasn’t stopped her from keeping up with Season 28 of The Bachelor. She took to Instagram Stories to share her thoughts on the contestants. Hannah admitted that she doesn’t have a favorite. But, there is one person she’s not fond of.

Victoria Fuller has become one of the most controversial contestants in Bachelor history. She explained that it’s hard for her to make a move. During the fashion show challenge, she made out with Peter in front of the other contestants.

Outside The Bachelor, Victoria was meant to be on the cover of Cosmopolitan’s March issue for winning a photo shoot challenge. Then, her cover was removed after photos of her posting for a “White Lives Matter” clothing line surfaced online.

It’s clear that Victoria’s beauty and charm has won Peter over. But that’s not the case for the rest of Bachelor Nation. Hannah Brown posted a video on her Instagram Story of herself watching the show, as reported by The Blast.

Victoria F. is heard saying on the screen, “it’s annoying to be around me.”

“Well, you said it…” Hannah responded in in agreement.

“I’m not purposely posting these when there is something ridiculous being said in the background… it’s just happening,” she admitted.

She’s her own Valentine this year

Now for some wholesome content. It’s time to focus on love, rather than hate. The Bachelor franchise is about bringing love into people’s lives. On Thursday, Feb. 13, Hannah posted a wholesome story about her Valentine’s Day plans on Instagram, as reported by Showbiz CheatSheet.

“I just have to tell y’all how my day was,” Hannah said in a clip. Then she stumbled over her words a few times. She was excited over the events that just unfolded. Though it was not as romantic as some of her one-on-one dates on The Bachelorette. Hannah said she went to Bluestone Lane to get coffee before returning home.

She noticed her favorite person who works at the valet. That led to her to find the perfect parking spot. Hannah said she previously determined whether she wanted to order flowers online and deliver them to herself. She made it clear that she wants to be her own Valentine this year.

Bobby made it through our date without having another stroke. I’d say that makes this date one of my top 5 of this year. @lightsout

Then she noticed a beautiful bouquet of flowers at the coffee shop and bought them for herself. As the barista wrapped the flowers, he told her it was on him.

“I got my Valentine,” she said with a smile.

In addition, her favorite valet said that Hannah’s smile was all he needed to get through the day.

“There are good men out in the world,” she said. Hannah also remarked that the valet gave her “hope” when it comes to love and dating.

Hannah previously revealed to Entertainment Tonight that she’s single. As for her involvement with Peter’s Bachelor ending, she couldn’t confirm or deny the rumors. Hannah also said that she will “always care for [Weber] deeply,” no matter what happens. It’s no wonder why she still feels emotional over Peter’s season.

What are your thoughts on Hannah Brown dissing Victoria Fuller? Sound off below in the comments section.