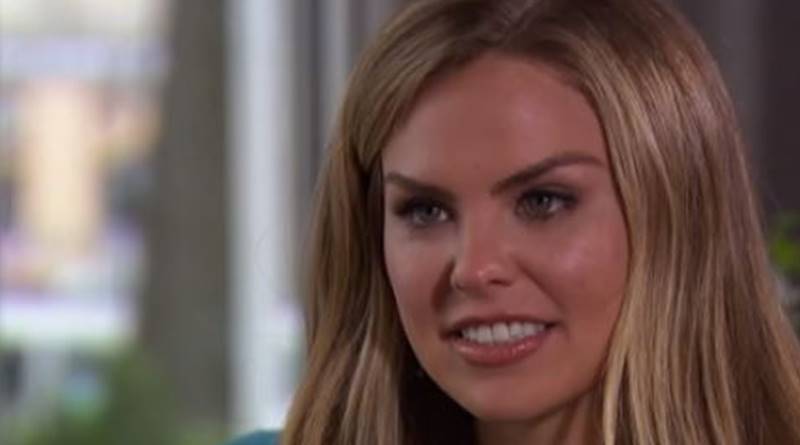 Hannah Brown from The Bachelorette, The Bachelor, and Dancing With The Stars, doesn’t always look immaculate. After all, she’s a boxer and fans saw her looking wrecked on the premiere of Peter Weber’s season. On Wednesday night, she shared clips to her Stories that seemingly dissed on PTA moms, referring to her appearance. But, she later backtracked, noting that she appreciates moms.

Hannah Brown and her disheveled appearance

TV Shows Ace reported that when fans saw Hannah Brown on the premiere of The Bachelor, Hannah wept and smudged her makeup all over the place. After the show, she tweeted about what a hard day she had. And, she added, “a day I was not looking forward to reliving.” Well, she certainly didn’t look good at the end of that show.

However, Alan Bersten also posted images of her on Instagram during DWTS, and she didn’t always look her best then either. Fair enough, it took loads of physical hard work to perform at that level. We also reported that Hannah Brown’s been “bringing out the beast,” during her boxing training. So, fans are used to her sometimes looking disheveled. But her latest Stores on Instagram seemed to get some criticism as she compared herself to a PTA mom.

I survived and thrived for one whole week in #campmode with my boy @leyon. Whew! It’s been so freakin hard but exactly what I’ve needed! I’m a bit competitive and can get frustrated when I “mess up”, but I’m so excited and encouraged to feel better, look better…and KO some jabronis if need be. 🥊 @gloveworx

Disorganized Hannah nearly runs out of fuel, talks her appearance

Taking to her Instagram, Hannah Brown shared a series of clips about her day on her Stories. Firstly, she said she almost had an empty tank and worried about getting to the gas station before she ran out. She mentioned that she’s “always” doing that sort of thing. Anyway, she made it okay and then spoke about how she’d been “talking” all day. She mentioned how she looked a bit wrecked.

Well, Hannah Brown certainly didn’t look her best. She said, “that was …fun,” with a caption that read, “Yikes, I haven’t seen a mirror today.” Then, she noted, “my makeup’s not where it’s supposed to be.” Hannah explained that she had a “really long day.” She then explained that she’d been “talking since ten o’clock this morning.” While she admitted she loves to talk, she then said she “looks like a tired PTO mom.” Later, she explained she meant that she looked like a “PTA mom.”

Later, she got home and shared a bit more. She shook her hair out and said, ” I’m already looking crazy.” But it seems that Hannah got some comments about her feeling she looked disheveled and crazy just like a PTA mom. She added another clip captioned, “I’m my valentine.” It showed a wilted rose. At first, she talked about the ring on her finger and assured fans that it’s on her right hand. But then, she went on to talk about PTA moms.

Hannah Brown said, “Also, to any moms that feel like I was jerking them, I wanna be a PTO or a PTA mom.” She added, “You also have every right to be tired and look however you want to. Most of you look pretty damn good.” But then she explained that “this [her hair], is after field day.” Hannah stressed, “you can’t look good after field day,” before saying, “but maybe you can – give me your tips.”

What do you think about Hannah Brown seemingly dissing on PTA moms and then backtracking? Sound off your thoughts in the comments below.

Remember to check back with TV Shows Ace often for more news about The Bachelor, The Bachelorette, and DWTS.