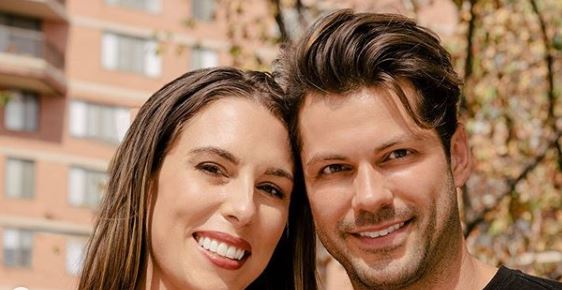 Couples Couch was all cozy and reassembled for the February 12 installment this week. It followed the Married at First Sight Season 10 episode, “New Wife, New Life”.  This week, Jamie Thompson and Elizabeth Bice from Season 9 were back, along with Anthony D’Amico, and Ashley Petta from Season 5. Bobby Dodd and Danielle Bergman from Season 7 and Jephte Pierre and Shawniece Jackson from Season 6 were also there.

Anthony and his wife had plenty to talk about with the five couples coming back to reality in Washington DC following their Panama honeymoons.  Heavy some hints, but the truth hurt this week. Couples Couch, like the Married at First Sight followers, were forced to pick up their jaws from the floor at a few points this week. The pairs from the past who stuck with marriage didn’t mince words when it came to their critiques. This was true particularly for two Season 10 grooms—Zach Justice and Brandon Reid.

Stepping out on a sweet note, all of the veterans on Couples Couch have nothing but good cheer for Jessica and Austin as they embark on real life together.  Anthony gave Jessica some ribbing about instantly moving her hubby’s possessions to the smaller closet.  On the Unfiltered preview before Married at First Sight, Austin stressed to Jamie Otis that he was “very patient.” He felt ready to be Jessica’s “punching bag” (emotionally) if she needed support after a bad day.

Shawniece and Jephte got the giggles when there was teasing about morning bad breath. Jephte playfully offered a toast with his juicy drink.  Shawniece couldn’t get over how the couples in Married at First Sight Season 10, like others in recent years, were provided apartments in the same complex.  “We had to go out lookin’ ourselves,” recalled the Boston bride.

It was hard again to hear Mindy describe her husband’s treatment of her as “cordial” and “like a friend,” to Otis before the broadcast.  She admitted that she has less faith in her groom to step up and seize all that their relationship could be.  Jamie and Beth instantly put the kibosh on any of the groom’s claims of “trying” in the relationship when he was choosing to make eggs for his dogs rather than wake up with his bride.

According to Mindy, Zach insisted that it “wasn’t healthy” for him and Mindy to live together.  Pastor Cal usually has ready, helpful answers, but this time he was even beside himself.   It took a long while for Zach to answer the question of whether he wanted to be in the marriage, and Pastor Cal did plenty of glasses-off, head rubbing in wondering if Justice was “there for the right reasons.” Still, he persisted with Mindy and Zach, individually and together.  Roberson bolstered Mindy’s spirits, telling her not to allow herself to be absorbed by Zach’s constant “attraction” issues.

Once again, it was mind-boggling to watch Zach do his dance of “I see all the reasons we were matched” with Mindy, and still end up sounding like it was all her problem.  Pastor Cal, of all the experts, knows how to be blunt, but not as blunt as the Couples Couch. Ashley swore that she was “done with Zach forever.”  Jamie Thompson and Bobby Dodd were in one accord as Bobby flatly said: “Zach is a d**che!”  Dodd also added that the absentee groom “shops at Baby Gap.”

Beth Bice didn’t need any expletives.  She simply proclaimed that “Zach is trash!” She also commented that “anyone who would wear a hat like that” isn’t worth the time, in her own fashion statement.  Only time will tell if a change of heart will happen for Zach or the Couples Couch.  Right now, the consensus is that this relationship is sinking, and the agreement is with Mindy’s best friend, who described Zach being full of something other than good intentions.  In only seven days, this groom has gone from one of the most romantic ever on his wedding day to a woeful excuse as a husband.

Pastor Cal had a great visit with Jessica and Austin, as they playfully played newlywed nerds with one another.  This pair has already planned out issues like income and having children. They are looking to the long term.  Derek and Katie still have strong devotion, but threw a curve when he said that it could be “six months to a year” before he would know if he was in love.  Katie also had a confession.  She admitted that she did have emotional ties to her other guy, but later told her husband that there was no communication whatsoever between them.

Derek said that he now feels “in a competition” with someone he never knew.  Nonetheless, these two seem to have the right stuff if they can get past the old stuff and the grind of daily life. They certainly have their love of dogs in common, too. Jamie worries that these two are “trying too hard.”

Who is being too private?

The success story partners of Couples Couch were astonished that Taylor, like Mindy, chose to go to the apartment rather than her own place.  They didn’t give Brandon Reid much leeway about his meltdown behavior prompted by the prying cameras. “This is a reality show,” Jamie yelled, “you know that going in– don’t do it if you’re so private!”

All the couples groaned as Brandon walked in with a bouquet during the exact time that Pastor Cal was hearing from Taylor about the honeymoon horrors.  “Pastor Cal is about to chew his a**,” Bobby Dodd exclaimed after Roberson took his glasses off again.  Brandon got more of a lecture than Zach– in strict terms, the pastor admonished “don’t mess this up.”  The Couples Couch was touched by the exercise of the expert, taking Brandon and Taylor through their wedding vows, with added promises.

The fate of this Married at First Sight match is now widely known, thanks to social media.  Every story has two sides and this season seems to multiply those sides every week.

The Couples Couch was heartened by the efforts of Meka and Michael to make a real connection.  Their visit with Pastor Cal brought Michael to tears.  “I don’t want to fail,” he gushed.  “We have issues to work through, but it doesn’t mean we’re failing,” Meka comforted.  She followed with a warm hug for her husband.  Jamie Thompson still feels that Meka is too mean, but at least both of these partners are putting in some effort together. “I need a drink after the show,” summarized Beth Bice.