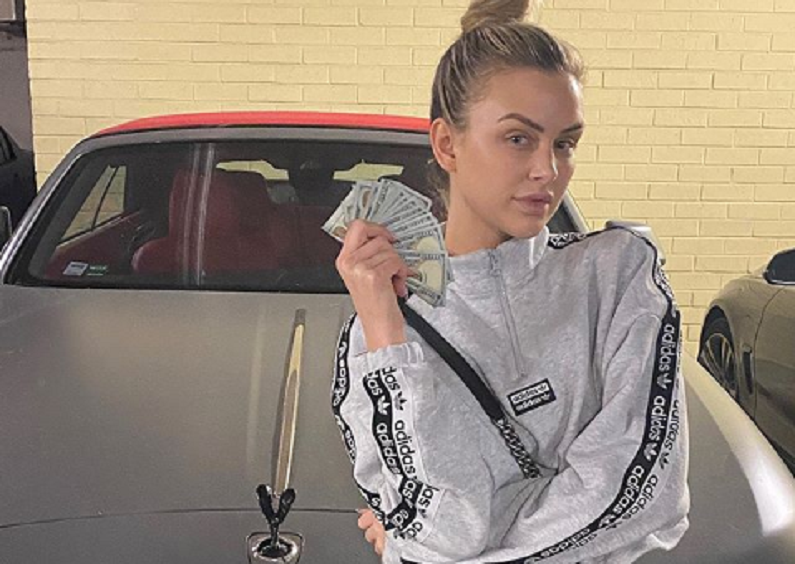 Lala Kent is in love with her fiancé Randall Emmett. She can’t stop gushing about him on social media. TV Shows Ace reported her heartwarming tribute to her man. The couple has been through their share of ups and downs. VPR fans scrutinized Lala and Randall when they found out he was married with children.

Now, they’re more comfortable with sharing their love with the world. Lala shared the thoughtful gift Randall gave her, just in time for Valentine’s Day. This comes after the couple appeared in a wedding-inspired photo shoot. Even though Randall will appear on Season 8 of Vanderpump Rules, they will not welcome the cameras to their ceremony. They agreed to keep their wedding private.

Lala Kent and Randall Emmett have amplified their love this year. Talk about relationship goals. The couple is finding creative ways to get ready for their wedding in April. Randall also hasn’t forgotten about old-fashioned romance. Lala posted a photo of herself with a beautiful bouquet of flowers. It looks like she got her Valentine’s Day gift early.

My sweet Rand sent me the most beautiful arrangement! He spoils me often with flowers, but these are by far the most beautiful I’ve ever gotten. Good work Rand! @enchantedexpress won you major points 😏🥰 #livebeautifully #valentinesflowers #nationwidedelivery #sponsored

Even though Randall often gives her flowers, this is her favorite gift by far. The pink flowers look as if they’re jumping out of the vase. According to the Bravo TV blog, the brass vase is not only stylish, but it also lasts longer than typical glass vases. We’re sure there’s even more tricks up Randall’s sleeve in the coming days.

Lala Kent attends the 2020 Oscars with Randall and Martin Scorsese

The couple spent their date night at the Oscars on Sunday night. Randall was nominated as one of the producers for the popular Netflix film The Irishman, starring Robert De Niro. As People reported, the movie was nominated for 10 awards, including Best Picture. Even though Randall didn’t win, he was still happy to be with Lala.

“I brought the best Oscar home – I’ve got her right here, my little statue!” he said on his Instagram Story.

The Vanderpump Rules star got dressed up to attend the Vanity Fair’s 2020 Oscars after-party in Los Angeles.

“All right, I came out, I got dressed up,” Lala admitted. “I lasted one hour. Done with it! Take me to bed!”

Randall posted a picture with Lala and The Irishman director Martin Scorsese. He remarked that they had “a magical night.”

This wasn’t their first red-carpet event. The couple also attended the 2020 Screen Actors Guild Awards in January. Vanderpump Rules fans were excited to see Lala sitting next to Meryl Streep. Lala quit SUR to focus on acting. Since then, she’s had several acting credits to her name, including a part in the upcoming movie, Axis Sally opposite Al Pacino.

Check back with TV Shows Ace on the latest news on the cast of Vanderpump Rules.

How Sadie Robertson Found Out She Was Pregnant
‘Bigfoot Family’ Has A Prequel & Here’s How To Watch It
Busby Quints’ Cousin Bronson Kickstarts Baseball Season
‘1000-Lb. Sisters’ Fans Ask If Amy Wants More Babies, She Responds
Reboot Wars: ‘Punky Brewster’ Or ‘Saved By The Bell’ – Which Was Better? (OPINION)