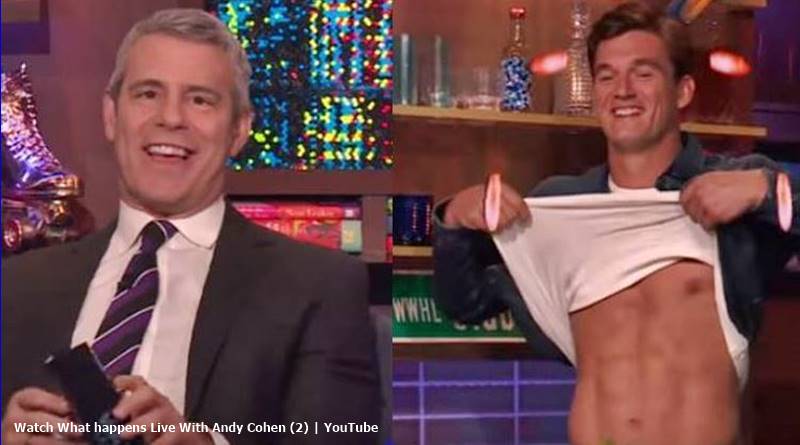 Tyler Cameron and Andy Cohen seem to have a close friendship. Tyler first got flirty with Andy on Instagram some time back. But, he often pops onto Andy’s Instagram to flirt a bit more. Now, he went on his own page and asked Andy to be his valentine. Fans of the two love the friendship that’s blossoming between the celebs. But could it become more than just friends?

Tyler took to his Instagram on Tuesday and shared three photos of him and Andy. Andy wore a bright red shirt, and Tyler wore more subdued colors. He tagged them in New York City. Tyler’s caption read, “Update: Things are going steady with @bravoandy and I. No one makes me smile as big as Andy does. Be my valentine?❤️”

As usual, many fans just wished Tyler asked them to be his Valentine. Super-popular, both men and women slaver over Tyler on his Instagram. But most of them just love this budding friendship. Andy responded and joked back, “MY MAN! I’m yours. ❤” Many fans of Tyler Cameron and Andy commented on the post. One said, “This is quickly becoming my favorite celeb friendship, neck & neck with Eminem and Elton John ♥️🙌🏼.”

Some fans grow confused about Tyler and Andy’s relationship

Some fans really don’t know if they should laugh at all the flirting between the two celebs. One noted, “Is this a real relationship or a joke? I’m so confused.” Another fan replied to that comment, saying, “inquiring minds want to know!!!” Meanwhile, one wit wrote, “Finally: someone from the bachelorette makes a sound love choice.” But, for confused fans, it certainly seems that Tyler’s not desperately hoping to become Andy’s love interest right now.

TV Shows Ace reported that Tyler Cameron’s open to dating more women. Recall he and Hannah B tried for a second shot after The Bachelorette, but he soon went off with Gigi Hadid. He never really settled into a long term relationship after that. So, he’s free and willing to date “anybody.” He referred to the other Bachelor Nation women. While there’s no reason for him not to date a guy, he never stepped out with one that caught the media’s attention. So, for now, it looks like his attachment to Andy arises out of friendship.

Update: Things are going steady with @bravoandy and I. No one makes me smile as big as Andy does. Be my valentine?❤️

Nevertheless, people who love the idea of Andy and Tyler Cameron as a couple need not give up just yet, After all, Andy’s not married, Bravo TV reminded fans just over two months ago. What do you think? Would you like to see Tyler and Andy stop flirting and joking and become a couple? Sound off your thoughts in the comments below.

Remember to check back with TV Shows Ace often for more news, rumors, and gossip about Tyler Cameron of The Bachelorette and Andy Cohen from Bravo.