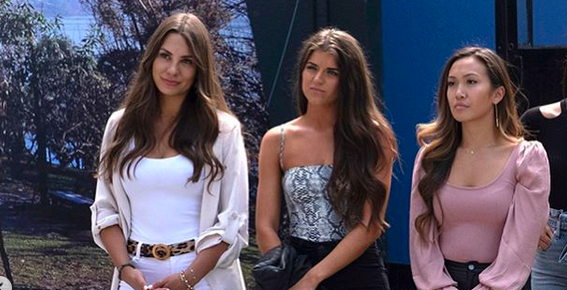 The Bachelor, like most reality TV shows, always finds a villain. And, it looks like Kelley Flanagan’s the one in Peter’s season. Recall that Kelley complained about Peter in the preview for the February 10 promo. Actually, her opinion in the confessional to the camera revealed her irritation with the other women and Peter. Now, she apparently liked some posts that dissed on Peter.

The Bachelor – Kelley Flanagan, the villain of the show

TV Shows Ace reported that Reality Steve dished some spoilers about the Rose Ceremony 7. Bear in mind that these ceremonies won’t take place at the end of the episode this season. Instead, fans only see them at the start of the next episode. So, the spoilers come out way ahead of the aired show. Following the group date in Peru, Peter sent Kelley home as we saw on  Monday. On the group date, fans saw Victoria Fuller and Hannah Ann Sluss alongside Kelley. That meant that Kelley never made it to the hometown dates.

Initially, it seemed that Kelley and Peter had a good connection. But possibly, the other women make more of a connection with Peter on a different intellectual level. Notably, Kelley’s not just a pretty face. In fact, US Weekly reminds fans she’s an attorney based out of Chicago. Actually, Kelley said on the show that the other girls seem like “babies.” In comparison, she felt that she’s the only one who could maturely engage with Peter. Now, it emerges that she’s allegedly been liking posts that diss on Peter and the other contestants on The Bachelor.

Does Kelley Flanagan diss on Peter and contestants?

Cosmopolitan revealed that @bachsleuthers found some tweets that hated on Peter–and Kelley liked them. One tweet said, “I respect Kelly so much more than I thought I would because she clearly hates Peter and this process and she’s not hiding it.” According to a screenshot published by the outlet, Kelley “liked” the post. But, it also looks like the likes got deleted by Kelley. She also reportedly liked tweets where fans talked about Peter rolling his eyes at her. It came when she said she wanted time to figure things out. Peter said the same thing, but he wouldn’t accept that from her.

The Bachelor fans felt that Peter came over as “disrespectful” towards Kelley. In fact, it seems that Peter mistook honesty for her judging him. Many fans feel that honesty’s important, especially if it involves a potential lifetime together. Actually, if Kelley liked that post, then she’s probably got every right to do so. Critics sometimes feel that Peter’s not only boring but also immature in some ways. It’s not clear though, why she deleted her likes. Maybe she liked the one about the honesty issue as Peter later said he appreciated her “honesty.” That came when he ditched her and kept Hannah Ann.

What do you think about Kelley Flanagan liking and agreeing with fans who think Peter’s behaving badly? Sound off your thoughts in the comments below.