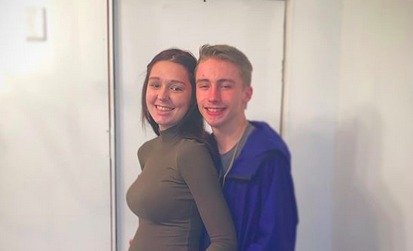 On January 15, TV Shows Ace reported that Hailey had gotten an EPO against her baby daddy, Matthew.

On her Instagram stories on Tuesday, February 11, she revealed that the EPO has been dropped.

She wrote, “The EPO is dropped. Me and Matthew are CIVIL and I don’t need anyone’s opinion. We are going to focus on communicating better for our sons sake. Levi will be here in 10 weeks or less and as far and we just want to focus on making the best situation possible for him.”

Because this is an Instagram story, her followers can’t publicly comment on it. They might send her direct messages about the announcement. But, she has turned off replies to her story to limit the hate she receives. Her followers can still message her, but they cannot reply directly to the story. 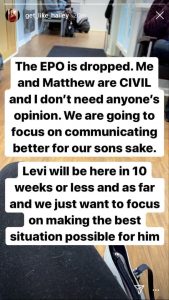 The two of them announced that they are expecting a baby on the tell-all of Unexpected. Since the announcement, their relationship has been rocky. This comes as no surprise to fans of the show. Matthew started flirting with Hailey 2 while he was still with Hailey Tomlinson (Hailey 1). He’s gotten both girls pregnant too. So, now the teenage guy has one child and one on the way.

TV Shows Ace reported that Hailey 2 has kept her followers updated on the pregnancy. She often does Q&As on her Instagram stories and lets her followers ask questions.

Recently, a lot of the questions have been about her relationship with Matthew. Unexpected fans were curious about their status and what it means for the baby.

Hailey 2 and Matthew first said that they would name their baby boy Levi Lee Blevins. Then, once Hailey 2 got the EPO against Matthew, she said the baby’s name would be Levi Carter Tilford. So far, they haven’t updated their followers on the baby’s name. They may change it because the EPO has been lifted.

On Monday, February 10, Hailey 2 revealed that things are looking up for her. She shared a few of the highlights coming up.

First, Levi will be born in April. Then, her birthday is in May. And she’s going to the beach with her best friend in June. The teen mom also revealed that she’ll be starting college in August.

Are you surprised to hear about the EPO being dropped? What do you think about Matthew and Hailey 2’s future? Leave a comment below.