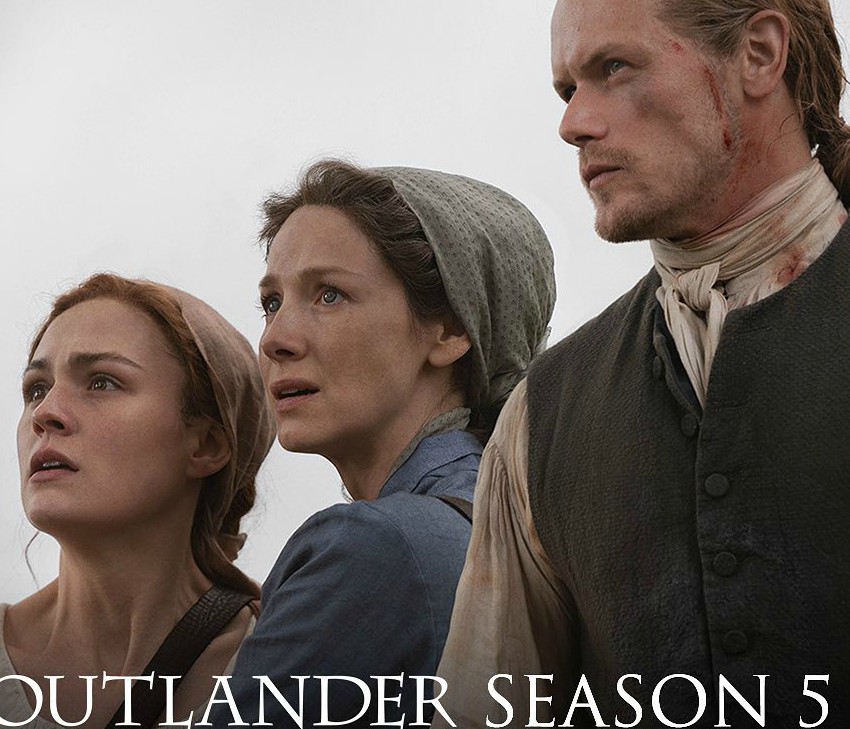 Outlander fans, rejoice. The end of Droughtlander is just days away. Season 5 of the Starz mega-hit premieres this weekend for a post-Valentine’s Day pick-me-up.

Get ready to step back through the stones and join Jaime (Sam Heughan) and Claire (Caitriona Balfe) on their latest adventure.

Season 5 is based on The Fiery Cross, the fifth book in the series by Diana Gabaldon.

It’s a long time between seasons and it can be hard to keep the action straight. In Season 4, Jamie and Claire’s daughter, Brianna (Sophie Skelton) travels through the stones to warn her parents of impending doom.

But before she leaves, she has a night of passion with Roger (Richard Rankin.) The passion turns to anger when she discovers he knew and kept mum about the danger facing Jamie and Claire.

Roger follows Bree back through time, but miscommunication results in Roger being sold to a nearby Indian tribe. Bree’s cousin, Young Ian (John Bell) exchanges himself (and Rollo, the dog) for Roger’s freedom.

By this time, Bree is about to give birth to a baby that may or may not be Roger’s. (She was raped during her journey to America.)

During all of this, Jamie finds himself inserted in both sides of the upcoming American Revolution. He’s bound by his pardon to fight for England, but Claire knows how the war ends and urges him to get on the right side of history.

The Battle Continues in Season 5

Based on the trailer Starz released, the impending war will dominate Season 5. Jamie continues to play both sides of the fence with Claire by his side.

Roger and Bree face their own battles as they weigh going back to their own time.

New characters emerge, including ‘wee cheetie’ Adso. Without giving book spoilers away, things happen that will continue through the rest of the series.

How to Watch Outlander

Outlander is original content for the Starz channel. Fans can subscribe to the premium channel through their cable provider. Starz also has a stand-alone app that can be accessed through their website, smartphones, tablets and other devices.

If you have Hulu, they have a Starz channel add-on for $8.99/month, which is the same price as the stand-alone app. New customers often get one-month free. This season of Outlander only has 12 episodes, meaning the show will only be on the air for three months. Some people subscribe to the Starz app just for three months and then cancel.

Season 5 premieres Sunday, February 16 at 8 p.m. on the Starz television channel. However, the streaming apps usually drop the newest episode on Sundays at 12 midnight, meaning you can watch it earlier than the broadcast.

Starz has already renewed the show for another season, which will likely air in 2021. The 9th book in the series, Go Tell the Bees That I Am Gone will be released later this year. Diana Gabaldon plans to wrap the series up with one more book, book 10.

Tell us – are you excited for Droughtlander to be over? Are you tuning in for Jamie, Claire or one of the new characters?