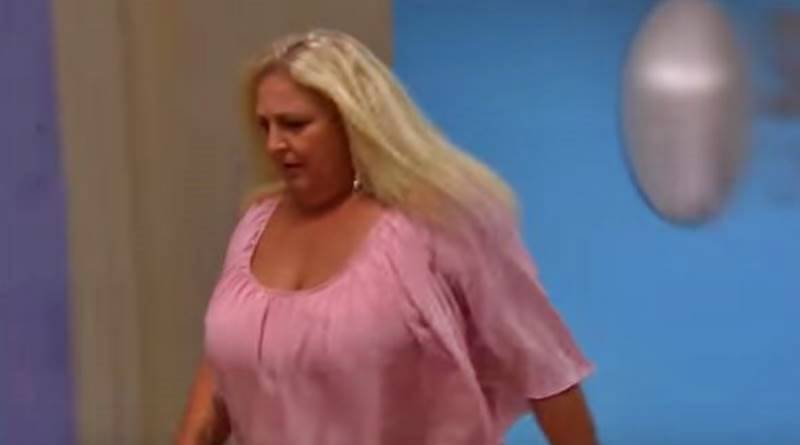 90 Day Fiance fans heard Angela Deem and Michael Ilesanmi returned for Season 7 of the show. Many fans grew upset about that after her drama in the previous Before The 90 Days Tell-All. But, as the current season seemed either boring or too scripted, they re-engaged with the idea of them on the show again. And now, it emerges that Angela spices up the Tell-All by threatening another walkout.

Fans might recall that the first reunion of Angela’s Season showed her go head-to-head with Rachel Bear. After Rachel commented on another couple, Angela got all steamed up, and when she got a finger gesture back, they got into a verbal fight. Fans also saw Angela yell at Michael about calling her his “elder” and did the walk. So, it came as no surprise really, that Angela really fired up and made the Before the 90 Days’ Tell-All something to remember. TV Shows Ace reported that Tim Malcome said the Tell-All would be explosive.

Fans saw it all play out as promised by Tim. Recall, Angela got into an altercation with both Tim and Avery Mills as they got in Jesse Meester’s face. Ranting about it led to a confrontation with Rebecca Parrot. After the breast-clashing stand-off, fans saw her leave the room.

Later, news emerged via Avery Mills that Angela allegedly assaulted her mom. InTouch Weekly reported that “Avery’s mom, Terri…told Angela not to speak to her daughter that way, leading Angela to confront Terri.” Avery then claimed an attempted assault by Angela during an un-screened part of the 90 Day Fiance show.

Season 7 Tell-All – Angela brings some spice to the show

In a preview for the show shared by the @mommy_says_bad_words account on Instagram, fans see Angela behaving badly once again. Actually, many fans said across social media, they can’t be bothered with this season’s Tell-All. After all, the general consensus is that the story lines were either badly acted, scripted, or edited and it still remained a mega-bore. So, news that Angela’s up to her entertaining, if badly-behaved scenarios, might encourage a few more viewers to tune in.

The preview shows Angela standing up in front of the screens. Michael’s in one of them, but she seems to be yelling at someone off-camera.  She yells, “Cut them off the screen, or I’ll walk out.” Possibly, as Micheal says, “What rubbish is that?” while looking to once side, it’s one of his friends that she loathes so much. The 90 Day Fiance veteran adds, “so kiss this white trashy *ss.” Then she yells. “I’m the classiest, trashiest B*** you’ll ever…” She turns her posterior towards the unseen person.

While that’s going on, the other cast reacts to her outburst. It shows Michael Jessen looking disgusted while Juliana looks stunned. Anna Campisi, the bee lady, says “uh-oh.” Blake looks away, and Jasmin turns to stone. Of course, Ms. I’m All About Me, Tania gives a theatrical shocked expression.

Actually, it’s interesting that Tania displayed the most obvious reaction to Angela. Over on Twitter,  more than one hater really hoped Angela would get into a fight with her more than anyone.

I hope Angela picks a fight with Tania at the tell all! #90dayfiance

What do you think about the news that the 90 Day Fiance star lots of people, love to hate spices up the Tell-All yet again? Does that news make you more inclined to tune in and watch it?  Sound off your thoughts in the comments below.