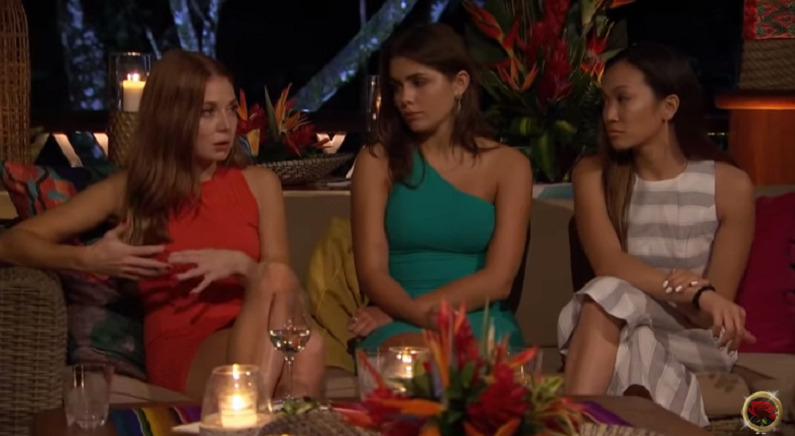 Bachelor Nation has spoken. Ashley Iaconetti doesn’t like the drama on Peter Weber’s season of The Bachelor. She first appeared on Chris Soules’ season of The Bachelor back in 2015. Even though Ashley rooted for some of the girls on the show this season, she can’t get behind their behavior. She’s tired of the “mean girls” who have taken over the show.

The past two episodes of The Bachelor were explosive. Tammy Ly first attacked Kelsey Weier on the Monday, Feb. 3 episode. Then, she attacked Mykenna Dorn for being on the show for the wrong reasons. Both Tammy and Mykenna were eliminated during the Wednesday, Feb. 5 episode. Ashley shared her thoughts about the new season in an exclusive interview with Us Weekly.

Ashley Iaconetti calls out the “mean girls” on The Bachelor

She spoke to the outlet at the live taping of her I Don’t Get It podcast on Thursday, Feb. 6 at the W Los Angeles. Ashley revealed that Tammy Ly was one of her favorites until the drama that went down this week. She loved Tammy’s wit and personality. But then, she was disappointed to learn Tammy’s true colors, as evidenced on the show.

“Someone that I was really rooting for was Tammy, I really liked Tammy,” Ashley said. “I thought she had a great personality until this week. I loved her, I thought she spoke well. She was like, who she was. She just felt very much in her own skin, but then I saw her just get really mean and I feel like there’s a lot of mean girls in this season and it makes me feel really sad.”

Ashley revealed that she would allow her kids on the show if only it wasn’t so dramatic and “traumatic.” But, she’s grateful to have been on the show. Ashley said she learned a lot about herself and was able to grow from it. However, she wouldn’t allow her kids to be “in that catty environment.” This comes after other Bachelor alumni slammed the series for being toxic, as reported by TV Shows Ace.

He made his appearance during Becca Kufrin’s season of The Bachelorette. He became a fan favorite during Seasons 5 and 6 of Bachelor in Paradise. Each week, he shares his thoughts on Peter and the contestants on his exclusive Life & Style column. On Tuesday, Feb. 4, Jordan slammed the contestants and called the show “mean girls on steroids.” Ouch.

“It’s mean girls on steroids. We just saw a glimpse of what these crazies are like behind the scenes,” Jordan wrote. “Victoria P. I’m onto your games!”

Is this season really the worst? It’s no secret that The Bachelor always had its share of drama. It’s become too common to see women fighting over the same man on TV. But does it really seem worse this season? Or, is Bachelor Nation growing tired of this all too common trope?

Obviously, most of Bachelor Nation doesn’t seem to like Peter’s contestants. Bachelor and Bachelor in Paradise alum, Demi Burnett, also feels the same way. She appeared during Colton Underwood’s season of The Bachelor. Demi tweeted that she’s happy not to be on Peter’s season, as reported by Showbiz CheatSheet.

“I would never want to be stuck in a house with these girls,” she tweeted during one of the episodes.

Bachelor fans mostly agreed with her. Some of them jumped into her mentions to exclaim how much they miss her. Others said that the new contestants have given them a headache. Other Bachelor fans took to Twitter to talk about the “mean girls” on this season.

Mykenna: Somebody wrote in that book that I'm lying about being annoying because I cry and complain constantly… but I can't help it if I’m overly emotional and a big drama queen. #TheBachelor   #MeanGirls #Bachelor #BachelorMondays #BachelorNation pic.twitter.com/O47dMA52Oo

#bachelor only Tammy is the real one! All these girls are annoying! So many mean girls this season! Makes me sick

What are your thoughts on Peter Weber’s season of The Bachelor? Do you agree that there are too many “mean girls” on the show? Sound off below in the comments section.