Jinger Vuolo recently started dipping her toes into the world of social media influencing. With the huge following the Duggar family has, this isn’t that surprising of a path to take. After all, it is an easy way to make money as long as a lot of people follow you. Jinger, however, revealed just how new she was to being a social media influencer. According to Without a Crystal Ball, she made a pretty massive mistake.

As we previously reported, Jinger Vuolo went live on her Instagram Stories recently to promote a financial application called Vimvest. Unfortunately for the TV personality, it quickly became clear she didn’t really understand the subject she was discussing. Viewers watched as Jinger’s eyes continuously darted off of the screen. It was assumed she was reading a script. Or, looking to her husband for advice.

Without a Crystal Ball noted Jinger repeated a lot of the same information. She, however, also missed a lot of key talking points about the application. This included things such as reasons to save money.

The TV personality made a massive mistake during her promotion of the app.

Turns out, if you swiped during her Instagram Story when she shared the code you could use, it took you to a screenshot that she likely never meant to share. The screenshot contained an attachment with information sent to her from the company paying her to promote the financial app. 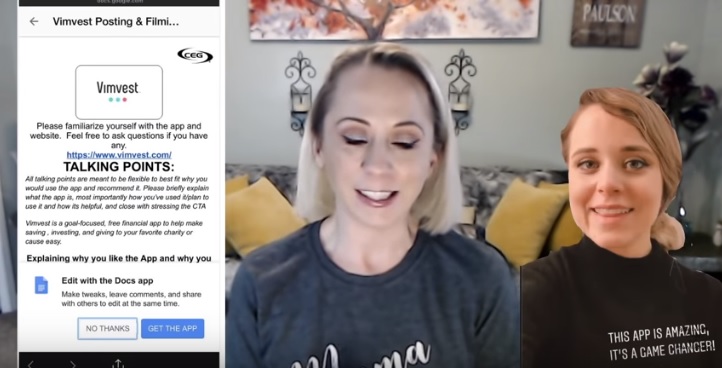 After reviewing the talking points sheet Jinger mistakenly added to her Instagram Stories post, Without a Crystal Ball noted that the social media influencer missed a lot of the key talking points. For example, the sheet noted she was supposed to discuss what she would do with the money she saved using the app. She never discussed this.

Without a Crystal Ball Followers react to Jinger’s mistake.

Surprisingly, not everyone was quick to throw shade at Jinger. In fact, one individual threw shade at Without a Crystal Ball instead. The individual noted the YouTubers’ children were “so loud” in the background.

“She’s young, she’s nervous. And. This is her first time out of the gate. I give her credit for trying to become autonomous from an overbearing upbringing. I’ve watched the Duggers from the beginning for. She is making great strides in growing up. Be nice!I’m from the Midwest as well. I know we are professional in throwing shade. Your kids are loud in the background should I get out my umbrella? The husband is biblically the head of the household. That is what they believe. You were young once. I have yet to support you for your close-minded comments that you judge these kids on. They didn’t ask to have hyper-religious parents. You should think before you vlog. We have enough judgment in the world. Don’t you think?”

Some took pity on Jinger for clearly not receiving a proper education. Others, however, just slammed the TV personality for promoting something she knew nothing about.

One individual penned: “Poor Jinger. Her 3rd grade kitchen table education really showed in this. Maybe she could promote how to look pretty for your ‘Babe’.”

“It’s kinda funny when everyone makes fun of her education yet there are reasons apps like this exist. Shes a real person just like everyone else. At least shes trying and maybe this app can actually help her,” another chimed in.

A third added: “Sorry she sounded like an idiot and I believe the app will pull their partnership with her as it is obvious she knows nothing about money, investing, or anything to do with it or even how to use the app! Bad choice on the companies part.”

Many grow concerned for how she would survive without her husband.

A few individuals noted the promotion of the financial app raised a lot of concerns regarding Jinger. What would happen to her if something happened to her husband? Would she have to move back in with Jim Bob and Michelle Duggar? Was her husband going to teach her about personal fiances?

Share your comments on the mistake she made during her promotion in the comments down below.