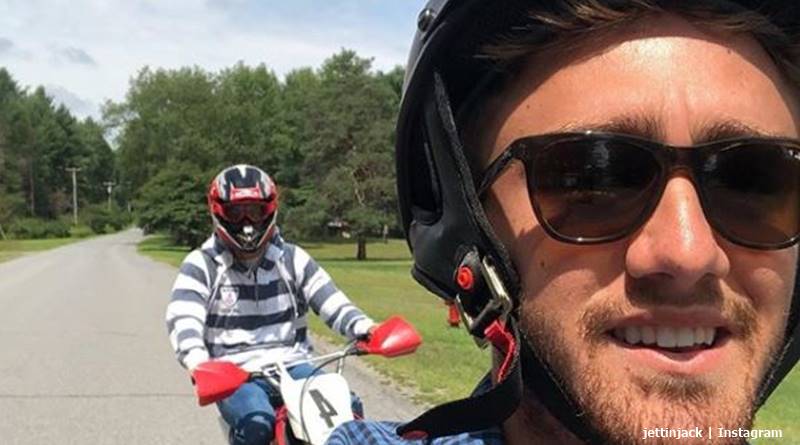 The Bachelor fans met Peter Weber’s family on his season and the family’s all into flight. Peter’s brother Jack attended UCLA and he’s a pilot. Plus, his dad flies for United Airlines. Peter flies for Delta, and his mom once worked as a flight attendant. Now, Peter’s very excited, as Jack just accepted a job as a pilot with an airline that sort of bridges the airlines he and his dad work for.

TV Shows Ace reported that Peter and his younger brother Jack both still live at home. But, his mom said that’s usual in Cuban families. At least until the boys marry. Recall that Peter’s mom’s of Cuban extraction, while dad’s from a German line. But, it doesn’t matter to the family that they all still share a home. Mom Barbara said, “we are a very, very close family. Very close…we’re basically one.”

So, it’s no big surprise that when Jack accepted a new job offer with an airline, the whole family was heard congratulating him in the background of a video clip. Peter shared about it on his Instagram Stories Friday night. The Bachelor lead captioned his post with, “The newest airline pilot of the Weber family. Congrats @jettinjack on taking an offer with @skywestairlines.”

Life And Style Mag reminds fans that Peter’s dad flies as a pilot for United Airlines. And, Peter files as a pilot with Delta Airlines. Skywest, according to their website, sort of bridges the gap between Pete and his dad. That’s because “Skywest SkyWest operates in partnership with Delta Air Lines, United Airlines, American Airlines, and Alaska Airlines and has a fleet of 503 aircraft.” The company does flights scheduled, marketed, and priced by a partner mainline airline.

Actually, those partnerships make Skywest one of the largest regional flight services in the USA. It really looks like Jack’s definitely keeping to the family tradition of working with airlines, like his The Bachelor brother and the rest of them. But, if you’re hoping that maybe one day, you’ll see Jack on the ABC franchise as a contestant, that probably won’t happen. It looks like he’s already taken and he shares some romantic pics on his Instagram.

Jack’s into romance in the sky as well

This season, fans saw that Peter Weber’s big into the idea of the Mile High club, rather than windmills in his The Bachelor. It certainly looks like Jack buys into that idea. His post on January 18 showed him in a plane with his girl, Kristine. He’s kissing her and through the window of the plane, there’s a sunset view. He captioned it with, “Thank God for autopilot.”

What do you think about Peter Weber and his family being so excited that Jack accepted a job offer as a pilot with Skywest Airlines? Do you think it bridges the gap nicely between Delta, where Peter flies and United, where dad works? Sound off your thoughts in the comments below.

Remember to check back with TV Shows Ace often for more news about the family of this year’s The Bachelor on ABC.