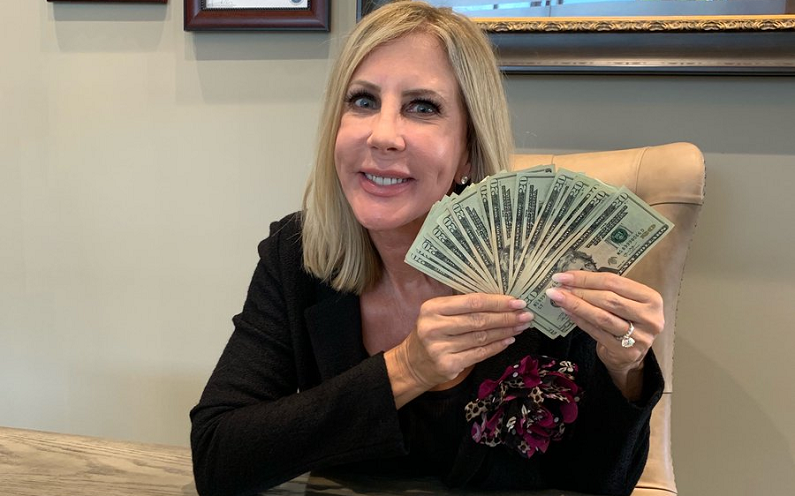 Vicki Gunvalson is excited about her future. The Real Housewives of Orange County alum posted a cryptic message about it on Instagram. Fans are wondering what she’s teasing in the coming year. Vicki is aware that things aren’t going to be the same. It’s also safe to say that RHOC won’t be the same without her.

She posted a cryptic message on Instagram just weeks after her surprising exit. Her latest Instagram post has fans wondering what she’s talking about. It seems like Vicki is teasing her future or possible return to the show. But it most likely has to do with her uncertain future. She knows that things won’t be the same as they were when she was on RHOC.

OK! Magazine reported that Vicki Gunvalson posted the mysterious message to her Instagram page. The 57-year-old’s message hinted towards the “changes” that are taking place in her life. She wants to “appreciate” the present moment because she knows it won’t last for long. The message is also a reminder to herself and fans to “trust the process.”

This is a great reminder to TRUST. 🙏

Fans asked Vicki if she decided to stay on the show. They were convinced that Vicki had something else up her sleeve. As you can see, most fans are hoping to see Tamra and Vicki on their television screens again. Here are some of the comments that the fans wrote:

Vicki has not responded to the comments. This comes after she broke the news on Jan. 24 that she’s leaving the show after 14 seasons. In her Instagram post, Vicki revealed that she’ll “always been the OG of the OC,” but it’s time for her to say farewell. She also teased her upcoming business ventures, including her new podcast.

Where does her relationship with Andy Cohen stand?

It’s clear that Vicki Gunvalson hasn’t taken her departure from The Real Housewives of Orange County too well. She was a housewife for 15 years on the very show that made her famous. As TV Shows Ace reported, she made claims against Andy Cohen and the show’s producers. Where does their relationship stand with the Bravo executive now?

As Showbiz CheatSheet reported, she’s been upset with Andy and RHOC production over the demotion. Since she was asked to return again as a “friend,” she decided to leave. It’s obvious that Vicki was hurt over the demotion. After Vicki made her feelings public, Andy spoke to Us Weekly.

Andy even shared a heartwarming Instagram about Vicki after she announced her departure from the series. He admires that she’s always been true to herself from the beginning.

I remember the first reunion I did with Vicki Gunvalson. Occasionally our eyes would meet as I grilled the other women, and she would wink at me optimistically and effervescently as both of her deep dimples shone. She kept winking at me Year after year, and it always made my heart smile. Vicki is an original, who remained her authentic self from her Family Van-freakout through her last reunion. It’s so hard to remain exactly who you are after being on television for so long, but Vicki is one of a kind. Thank you for everything, @vickigunvalson – what a ride. And it’s not over. (This pic is actually from the Season 3 Reunion, and I always really liked it..) ❤️ 🍊 #RHOC

Season 15 of the Real Housewives of Orange County will start production soon. No premiere date has been announced as of yet.

What are your thoughts on Vicki Gunvalson? Do you think she’ll return to RHOC or that she’s done? Sound off below in the comments section.