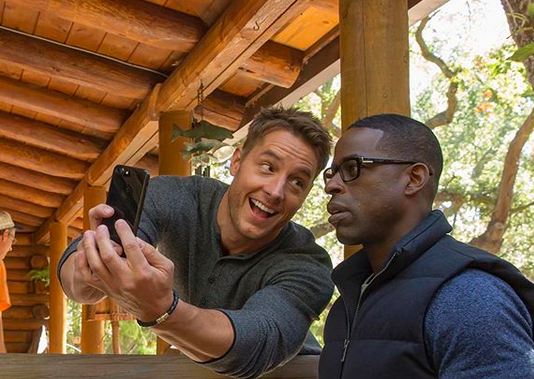 Thanks to the previews for upcoming episodes of This Is Us, fans know that Randall Pearson (Sterling K. Brown) and Kevin Pearson (Justin Hartley) aren’t on great terms. When they’re celebrating their 40th birthday, things definitely aren’t good.

All that fans know is that something happens. As of right now, any ideas as to what could be going on between the brothers are purely speculation. And, fans of the show won’t find out what actually happens for a while. So, viewers can continue brainstorming possible conflicts between Kevin and Randall.

Co-showrunner of This Is Us, Isaac Aptaker, mentioned that, “something big is coming.” Now, whatever it is is quite a change from the brothers who depend on each other. As viewers have seen, Kevin has been Randall’s rock as he deals with anxiety and panic attacks. They’re always there for each other. But, it’s not going to stay that way.

Still stressed for Randall and family? So are we. 😰 Drop your theories for tonight's #ThisIsUs. 👇

Isaac also said, “It’s definitely something that’s coming out in the near future run of episodes. By the 40th birthday, by the start of next season, they’ve had this falling out. They’re not on speaking terms. In this episode [that aired Jan. 21], they’re so beautifully there for each other and they have this pretty incredible brotherly relationship. So something big is coming in this next run before the end of our season that will tear these two apart.”

This Is Us star Justin Hartley talks conflict

Even though we don’t have a lot of answers yet, Justin Hartley opened up about what’s going on. Of course, he couldn’t give too much away.

Justin recently explained to ET, “It’s big. No, it’s big, big. It’s more than a misunderstanding. I think it’s a philosophy. It’s like, ‘This is how you handle your life and this is how you deal with things and this is what you think. I go about my business a different way,’ and they just can’t [see eye to eye]…”

Justin explains that this conflict is on “another level”. Many people have issues with their friends or families every day. But, those things blow over. The way Justin talks about this problem is like it can’t be resolved. It supposedly changes their lives for good. So, their relationship may be essentially over very soon.

The whole This Is Us conflict will go down very soon. It’s possible that it’ll happen before the season is over. Or, it could be part of a cliff-hanger as this season comes to a close.

Justin says, “This one’s for real. This is not like we’re going to argue about something. This is two men, two brothers each taking a stand that suggests that if they don’t bend, the other one will not be in their life. I mean, it is a big deal. It just gives them… it’s a big deal.”

Are you looking forward to seeing what goes down between the Pearson brothers? What are your ideas about the whole thing? Leave a comment below.