Young and Pregnant fans took issue with the moldy bathroom.

Young and Pregnant fans watched as Rachel gave her 22-week-old daughter Hazelee a bath in the tub. A new man she was seemingly trying to get with was also sitting in the bathroom with her at the time.

Fans, however, had a hard time appreciating the adorable baby girl in the tub. They were too distracted by the layer of black mold growing in the background around the tub.

In a Teen Mom fan group on Facebook, viewers shared screenshots from the episode featuring the moldy tub. Many were quick to slamming the young mother for bathing her daughter in such a “DISGUSTING” bathroom. 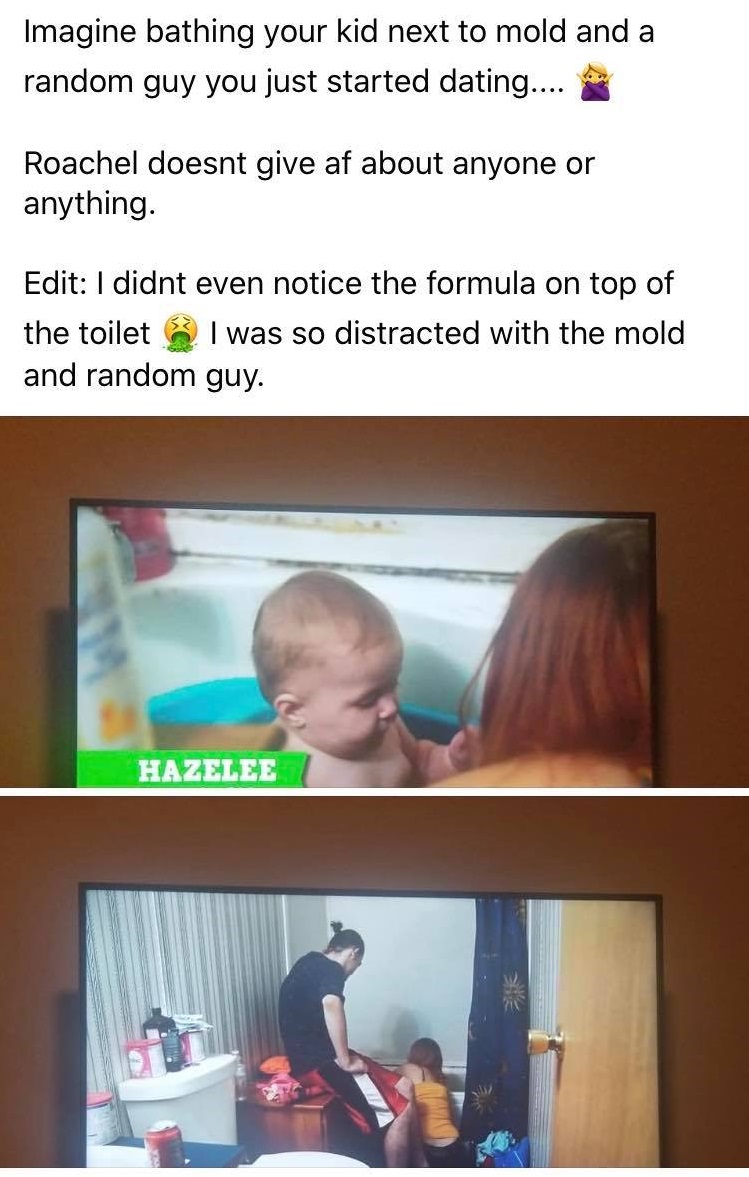 In fact, here’s some of what fans of the MTV series had to say about Rachel Beaver’s bathroom:

Some fans even cried for CPS to be called on the young mother.

“Why hasn’t cps been called?? Omg I honestly can’t stand watching the show anymore bc of her! Legit trash and she needs birth control before there’s anymore of those roach infested crotch goblins roaming around,” one individual exclaimed.

Young and Pregnant fans also took notice of the containers of formula sitting on the toilet tank. Why were they sitting there? Were they empty? Surely she didn’t prepare the bottles in the bathroom. Fans had a wealth of concerns.

“And formula on the toilet😰 wonder what her excuse will be for that.” One fan penned.

Another chimed in: “she uses the tank water to mix it 🤢”

“she probably makes bottles at night from the hot tap water out of the sink…🤮” A third added.

During Christmas of last year, Rachel Beaver was slammed for cockroaches.

As we previously reported, Rachel Beaver took to social media to share a video of herself opening some of her daughter’s Christmas presents. What was intended to be a sweet moment went sour. Young and Pregnant fans noticed a cockroach crawling out of the wrapped present.

After making headlines, Rachel Beaver went to Instagram to speak out about the cockroach. She insisted it was hot at her mother’s home where she currently resided. She also insisted it was just a single cockroach and she didn’t notice it or she would have killed it.

Do you fear for Rachel Beaver’s daughter? Sound off in the comments down below.

‘Game of Talents’ Exclusive: ‘Joanne’ Tests Freddy and Jessica’s Sleuthing Skills
Jinger & Jeremy Vuolo’s Readers Say Book Is ‘Boring’ & A ‘Money Grab’
Emma Johnston Shares The First Man She Ever Loved
Wait, Someone From TLC’s ‘OutDaughtered’ On ‘DWTS’?! See Video
Tori Roloff’s Neighbor Speaks Up About Who She Really Is