In a recent Instagram post, Anna Duggar shared a sweet post of her son Mason dressed as an astronaut. The little boy is two years old. Anna is also the mom of five other kids, Mackynzie, 10, Michael, 8, Marcus, 6, Meredith, 4, and Maryella, 2 months. Anna is the wife of Josh Duggar.

In a video, Mason says that he’s an astronaut. She also shared a close-up photo of his astronaut suit. Her followers think that the video and picture are adorable! They love his toddler voice in the video too.

The last picture in the series is of the Duggar family at the U.S. Space and Rocket Center in Huntsville, Alabama, according to Anna. The family took a trip there in 2012. Mackynzie wore the astronaut suit when they made the trip years ago, but now it’s Mason’s turn.

Mason is such an adorable little guy and he keeps us all entertained with his big dreams! 🧑🏻‍🚀🚀 Mackynzie dressed him up in this little astronaut suit she wore back in 2012 when we visited the U.S. Space & Rocket Center in Huntsville, Alabama. 👩🏻‍🚀🌎 I can’t believe how fast time has flown by! 💫 • • • #littleduggars #space #rocket #astronaut #Mason #Mackynzie #throwbackfriday

Anna implies her kids may go to college

Obviously, college is still far off for the Duggar kids. Anna’s oldest daughter is only 10 years old. So, she won’t even begin thinking about college for another eight years.

But, one of Anna’s followers had a question about college for the kids. Someone asked, “Will you let him follow his dreams, if in fact he does decide he’d like to be an astronaut?”

To this, Anna simply answered, “Absolutely!”

Another follower said, “I don’t think there is a Bible-based correspondence course for that particular field.” 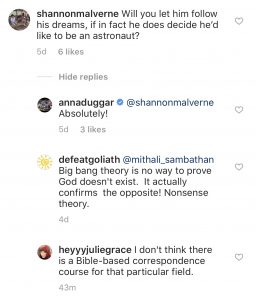 Do the Duggars go to college?

It’s not typical for the kids in this family to go to college. Some of them have gotten into real estate with Jim Bob. While they have jobs, they are not college graduates.

The women in the family are expected to stay home with their kids. So, college doesn’t seem to be an option for the women.

Michelle homeschools the kids through high school, so they have no other school experience.

A few of the Duggar spouses have attended college or are currently in college. Derick Dillard, who married Jill, is currently attending law school. Jill last reported that he’s halfway done.

Abbie, who married John Duggar, is actually a registered nurse, so she attended college too. This was prior to meeting or marrying John.

Right now, Jeremy Vuolo, who married Jinger Duggar, is attending the Master’s Seminary in Los Angeles, California. That’s why he, Jinger, and their daughter Felicity moved to Los Angeles.

It’s worth noting that Jim Bob and Michelle didn’t go to college either. So, this could be part of the reason they don’t put a strong emphasis on their kids attending college.

Michelle previously wrote about the kids attending college in a blog post. She said, “The great thing about it is it’s a distance learning program, for the most part, and then you have a coach who will come alongside you and assist you in studying and preparing for your courses. Taking the courses online works with your schedule so that you’re still able to work or pursue other experiences while studying. Also, the cost is minimal compared to the brick-and-mortar universities, and as a large family with a debt-free policy we’ve been really pleased with that.”

Then, she continued, “A few of our kids are taking courses right now, and I think some of them will go for their degrees in whichever areas they decide, and then I think some of them may not really go for the full degree — but they’re getting knowledge and information for skills that they want to gain. All my kids are different, and it will be interesting as time goes on to see which direction each one will take.”

Just because the Duggar kids haven’t gone to college doesn’t mean the grandkids can’t go. Plus, there is a greater need for college education than there was before. So, there’s a possibility. But, Mackynzie is the oldest grandchild and still won’t be of college age for eight years. It’s going to be a while before we know for sure what Anna’s plan is.

What do you think of Anna’s comment? Do you think it will turn out to be a problem if her kids go to college? Leave a comment below.