If you’re a fan of the Duggar family, you probably know that someone is almost always pregnant. And, right now, none of the women have gone public with their pregnancies. Fans are assuming that someone has to be pregnant, but there haven’t been any announcements.

So, the women are getting lots of questions about whether they’re pregnant. After the Duggar baby boom in 2019, there are few women who could be pregnant. But, questions are still being asked.

On Monday evening, Jessa Seewald shared a new video of her eight-month-old daughter, Ivy, learning how to crawl. Most of the comments were all about how sweet the baby girl is. Jessa’s followers were impressed with her.

Of course, not all of the comments on her posts are positive. In a comment on Facebook, someone said, “Bet she’s pregnant again now”.

The Duggar women regularly get comments like these because it seems like someone in the family is already pregnant. Several of them are choosing to have lots of kids or to have their kids close in age.

The way she jerks those chubby legs up to get into her crawling position. It gets me every time. 😍😆👶🏻 . She’s two weeks into her discovery of this new mode of transportation, and she’s getting better at it by the day. It’s so cute to watch. She’s so proud of herself when she reaches her destination!

So, most of the women ignore these comments. But, Jessa has had enough and decided to clap back. She commented back and said, “Yes, and it’s triplets this time!”

This isn’t the first time that Jessa has clapped back at trolls and haters on her posts. She has a history of it and doesn’t seem to be holding anything back.

The recent Facebook comments have since been deleted. But, you can see them here. 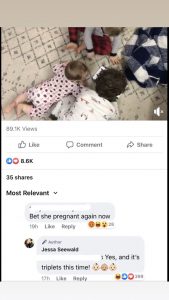 It’s not clear which Duggar will be the next to get pregnant. But, Jessa isn’t one of the more likely ones.

Her youngest daughter, Ivy, isn’t even a year old yet. She’s just eight months old. So far, Jessa’s three kids are each about two years apart. It’s possible that she will stick with that same pattern. In that case, it’ll be a little while before she announces she’s pregnant again.

Plus, Ben, Jessa’s husband, has revealed that he doesn’t want a large family. So, it’s unlikely that the couple is in a big rush to get pregnant again. They have time.

There are a few women who Duggar fans think will be pregnant soon. But, it’s all purely speculation at this point. It’s likely that someone is pregnant and just not announcing their pregnancy yet.

What do you think of Jessa’s response? Are you impressed? Leave a comment below.