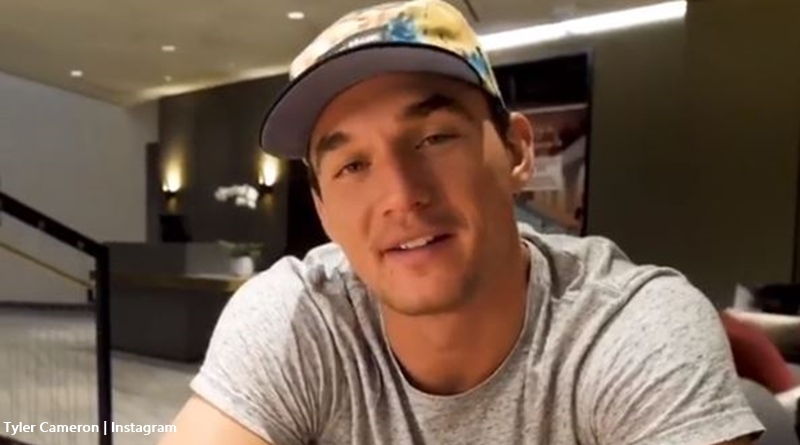 The Bachelorette fans know that Tyler Cameron’s not shy about flirting with beautiful women, and even hunky guys like Andy Cohen. And, most fans don’t see anything wrong with that, as he’s not in a serious relationship right now. But, maybe something comes from the newest flirting he has going on with Juliette Porter. However, as she made light of it, maybe they’ll just remain friends.

TV Shows Ace reported that Tyler previously dated Gigi Hadid. Then he moved onto Anastasia Karanikolaou, but that faded away after a short time. Nothing much really happened since then. But, People reported that a source told them he and Juliette Porter had a fine time together “at the MAXIM Big Game Experience event in Miami the night before Super Bowl LIV.” Juliette Porter joined this season’s The Bachelor Peter Weber, his brother, Tyler, Jason Tartick and Blake Horstmann.

According to the outlet’s sources “She seemed to be having a lot of fun with the group.” But Tyler also enjoyed himself as he and Julia seemed “super-flirty.” It must have been a memorable time for Juliette, who shared a clip on Instagram Stories. Later though, after the media broke the story, Juliette indicated that The Bachelorette’s Tyler was not her only interest at the event. She shared a Story on Tuesday night where she said, “I met Jamie Fox too that night. And we also had fun.”

People reported that they reached out for comment, but never got a reply. Nevertheless, it looks like her Instagram Story pretty much scratched the idea of a long-term romance beginning. And, bear in mind, it’s not that unusual for Juliette Port of Siesta Key to hang with Bachelor Nation guys. She dated The Bachelorette‘s Robby Hayes and they split in summer last year.

Over on her Instagram, not many fans talk about Tyler Cameron flirting with her. But a few of them still talk about her previous relationship with costar Alex Kompothecras. His girlfriend, Alyssa Salerno’s expecting a baby. One fan commented to Julia, “we luv u and we’re glad ur not pregnant with alex’s baby.”

What a time to be alive👯‍♀️

Tyler’s fans flirt with him tirelessly

Over on his Instagram, The Bachelorette‘s Tyler Cameron’s not saying much at all about Juliette Porter. And, over there, his fans continue to flirt with him tirelessly. Every single post he shared sees loads of people declaring their love for him. Tyler probably gets about a thousand marriage proposals every single day.

What do you think about Tyler reportedly flirting a lot with Julia Porter? Do you think it’s the beginning of something? Or, did they just enjoy some fun together? Sound off your thoughts in the comments below.

Remember to check back with TV Shows Ace often for more news about Tyler Cameron of The Bachelorette.