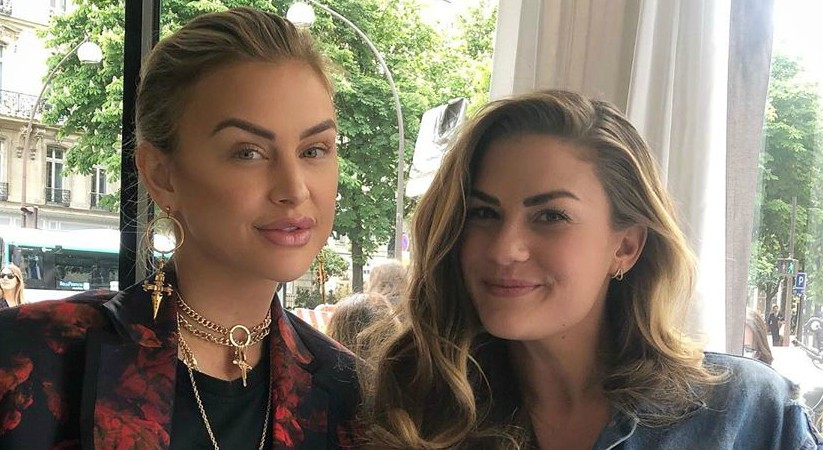 Vanderpump Rules drama can drive a person to drink. Stars Lala Kent and James Kennedy have both chosen a sober path after years of drunken outbursts. Fans of the show often worry about how Lala can avoid the temptation to drink. Many of her VPR co-stars still enjoy adult beverages–sometimes to excess.

During an earlier episode this season of Vanderpump Rules, fans saw something strange. While hanging out with SUR owner Lisa Vanderpump, Lala appeared to take a drink. The confusion stemmed from the star drinking orange juice out of a wine glass.

Fans also note that the VPR star often has a drink in her hand to toast with co-stars. TV Shows Ace reported that Lala celebrated one year sober in October of last year.

Today, I am 1 year sober. This is the biggest accomplishment I’ve ever had in my life and the one I am most proud of. The moments I have had in the past year have been a blessing that I have been present for. I didn’t have that before. Today, I will celebrate my 1 year birthday because it’s exciting. It is also humbling. Because today, and every day after that, I will fight for it. But I wont give it up for anything ♥️

However, the stress of planning her upcoming wedding to Randall Emmett could cause a relapse, VPR fans worry.

Reality Blurb reports that Lala and her fiance, Randall Emmett, recently launched a podcast. Brittany Cartwright and new hubby Jax Taylor were one of the first guests of Give Them Lala… and Randall.

The wide-ranging discussion touched on Lala’s sobriety when a fan asked her point-blank about the wine glasses. When the fan inquired if Lala was drinking again, Brittany jumped in immediately with a “Hell no, she ain’t drinking.”

The Kentucky native then defended her close friend by offering an explanation. According to Brittany, looks can be deceiving. While it may appear that Lala is drinking, whatever is in the glass definitely isn’t alcohol. Brittany said,

“If she ever looks like she’s drinking alcohol, it’s because she likes to look like she’s in the act of taking a shot or cheers-ing with us.”

Lala’s Reasonable Explanation for the Behavior

Lala went on to assure fans that if it looks like she’s drinking, it’s not an alcoholic beverage. The Like a Boss singer has a very simple explanation. She just likes drinking from wine glasses. And also baby bottles, but that’s a different topic.

Speaking of alcohol, Brittany and Lala offered their take on the argument between Stassi Schroeder and Tom Sandoval at TomTom.

As fans know, Tom Sandoval and Stassi Schroeder got in a blow-out fight over Stassi’s book signing event at TomTom. Along with Tom Schwartz, Sandoval is a part-owner of the bar. The issue began when Sandoval was left out of planning the event.

TV Shows Ace reports that the fight was filmed several times in a row and perhaps not as spontaneous as the show made it seem.

During the argument, Sandoval accused Schwartz and Stassi of not understanding the restaurant business. The former model was concerned that the event was understaffed by inexperienced bartenders.

However, Brittany dropped a bombshell during the podcast appearance. She says that the only drinks available were wine and beer, neither of which requires a mixologist. Brittany also pointed out that newbie Max Boyens was in charge of the schedule, not Sandoval, Schwartz or even Lisa Vanderpump.

While Brittany took Stassi’s side in a diplomatic way, Lala did not mince words. The bride-to-be said it all came down to one thing: jealousy. She said,

“Bottom line is it wasn’t about Tom Sandoval and he was pissed about it.”

What are your thoughts on Sandoval’s behavior? Was he right to be concerned over staffing or did he overreact because he wasn’t in charge of the event?

The drama continues on Vanderpump Rules Tuesday nights on Bravo.