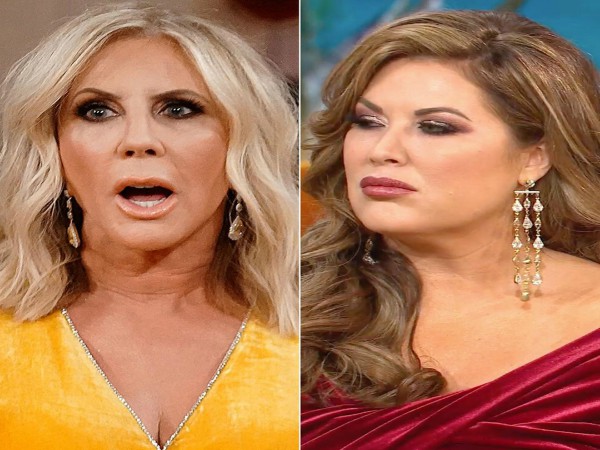 The Real Housewives of Orange County star Vicki Gunvalson is burning all of her bridges to the show. Days after announcing her official departure from the show, Vicki engaged in a Twitter feud with a former co-star.

In the past, Vicki has tangled with Kelly Dodd and Braunwyn Windham-Burke. However, neither of those women were on the receiving end of the OG’s rage, according to Reality Blurb.

The Real Housewives of Orange County star first began feuding with Emily Simpson on social media in December. The argument started when Vicki reacted to an episode of RHOC. In the episode, Emily called her co-star “geriatric” and made other digs about Vicki’s age.

A fan responded to Vicki’s initial tweet by blaming Kelly for being a bad influence on Emily. Vicki retorted that Emily “drank the kool-aid.” Emily then accused Vicki of trying to turn her against Kelly. There were crickets from Vicki…until this weekend.

Out of the clear blue sky, Vicki replied to the old tweet by calling Emily a liar. The real estate agent called a truce with Kelly at the Season 14 reunion. With that in mind, Vicki made it clear that any issue she had with Kelly was between the two of them.

Unfortunately for Vicki, she used a common mistake in grammar. Instead of writing, “between her and me,” she wrote “between her and I.” Emily quickly pounced on the grammar error by correcting Vicki.

Vicki Responds with an Insult

The RHOC alum didn’t take kindly to being corrected on her grammar. She may have intentionally tried to get under Emily’s skin with her next tweet. She wrote, “Your an idiot.” The correct usage would be “You’re.”

Rather than pointing this out to Vicki, Emily took another tactic. She upped the feud’s ante with an insult of her own. In perhaps one of the most epic clapbacks, Emily downed Vicki with two words.

As fans know, Vicki was demoted from full-time cast member to a guest role ahead of Season 14. Vicki made it clear at Bravocon that she wasn’t happy about her new role. At the time, she vowed not to return until she got her orange back.

A little over two months later, she remained true to her word. Earlier this week, she announced that her time on RHOC was done. Co-star and pal, Tamra Judge, also quit the show for the same reason. Reportedly, Bravo offered Tamra a hefty sum for a three-episode send-off. The gym owner refused.

Emily isn’t the only person Vicki is on the outs with from Bravo. TV Shows Ace reports that Vicki had a falling out with Bravo host Andy Cohen over his unsupportive behavior. It’s unclear if the two have made amends yet. He did say that he hopes to see Vicki return to RHOC in some capacity.

The Real Housewives of Orange County will return to Bravo later this year.