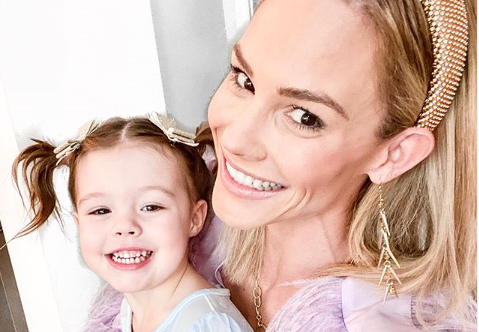 Meghan Edmond’s divorce circus is finally calming down after lots of stress. Now, she has something new to worry about. Fans were concerned to learn how easy it was for her child to access her medication. Meghan has been in the news lately because of her messy divorce. She’s given multiple interviews talking about Jim’s misgivings in their marriage.

As most reality stars know, people are always judging their parenting. When those stars share their lives on social media, they almost expect the shaming to happen. Recently her 3-year-old daughter Aspen found melatonin in her purse. The child then ate it and reportedly conked out.

The reason fans of the RHOC star know about the pill is because she shared it with them. In a now-deleted post, Meghan Edmonds posted to Instagram a snap of Aspen sleeping. She captioned it, “this angel found a melatonin gummy in mama’s purse leftover from our flight. 30 mins later (that was 2 hours ago).”  The picture is of the baby knocked out cold with Meghan behind her.

Fans were concerned her baby had access to her medication so easily. They worried it could have been something more harmful. If she had time to ingest the melatonin, what else could she have potentially eaten? The melatonin was in gummy form, which most likely made it appealing to the little girl.

It seems unlikely CPS would be called because the baby wasn’t harmed. Fans still wonder due to the face Meghan Edmonds and her husband share custody of their three children. They have twin sons, Hart and Hayes who are one, along with three-year-old Aspen. Melatonin is something the body makes naturally. It is created synthetically to be used in pill form. The most common use is to help with insomnia and, in this case, sleep patterns when traveling.

The drama has been heavy with Meghan saying that Jim Edmonds cheated on her and talking about his new girlfriend. Jim has taken a different approach according to All About The Tea. He doesn’t want to get into it. Jim said, “Meghan decided to publicly broadcast what was essentially a 30-minute therapy session about her marriage.”

He went on to say she will get attention by talking to anyone who will listen.  Meghan will likely pay more attention to where her pills are now that she knows toddlers are busybodies who will put things in their mouths.