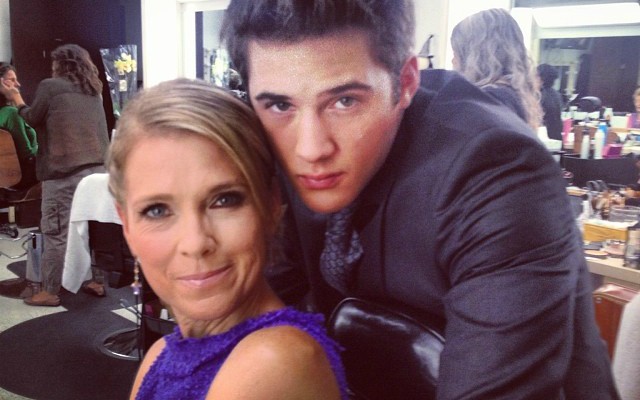 Another month of drama in fictional Salem, USA, kicks off this week on Days of Our Lives. The show continues the ploy of John (Drake Hogestyn) and Marlena (Deidra Hall) believing the other to be dead.

As Princess Gina (Kristian Alfonso) gets closer to being exposed, Stefano (Stephen Nichols) reveals himself to an unsuspecting person. It’s not Valentine’s Day yet, but fans can expect four-letter words to be uttered as one couple profess their feelings.

Sarah Drops the L Word on Days of Our Lives

The connection between Xander (Paul Telfer) and Sarah (Linsey Godfrey) has been growing for a while now. The couple even though they shared a daughter together. However, Xander knew all along that the baby was actually Kristen (Stacy Haiduk) and Brady’s (Eric Martsolf) offspring.

Xander catches Sarah in a compromising position with Eric (Greg Vaughan.) This rattles Xander, but Sarah ends up revealing her true feelings for the hunk.

Stefano Plants a Kiss on Marlena

With John presumed dead by Marlena, Stefano swoops in to save her. However, Marlena thinks it’s actually Steve, not realizing that he’s been brainwashed into thinking he’s the Phoenix.

Stefano locks lips with Marlena and reveals his true identity to his “Queen of the Night” this week.

Meanwhile, Princess Gina drugs John in an attempt to rekindle their romance. Now that Shawn Douglas (Brandon Beemer) is on to his “mom,” Princess Gina’s days are numbered.

To get back at Nicole (Arianne Zucker,) Kristen reveals to Eric that his ex is back with Brady. Except she’s not. The former lovers cncocted their romance to keep Brady out of Kristen’s web. He finds himself drawn in this week as the former couple shares a moment of bonding.

Meanwhile, Nicole fesses up to Eric about the ruse. The couples reunite and vow to stay together this time.

Shocker: Who is Leaving Days of Our Lives

It was widely reported in November that Days of Our Lives fired the entire cast and was on the verge of being cancelled. The report was overblown and the show was recently renewed for another season. However, the cast was released from their existing contracts to be renewed at a later date if they were still available.

Soaphub broke the news this week that actor Casey Moss is leaving the show later this month. He has played JJ Deveraux since 2013. The character recently lost another girlfriend (played by Thia Megia.) JJ’s earlier love interest, Paige, was killed off the show. (Fun fact: True O’Brien, who played Page is Casey’s girlfriend in real life.)

Days of Our Lives airs weekdays on NBC. Keep your eyes on TV Shows Ace for more news on the actor’s last airdate.