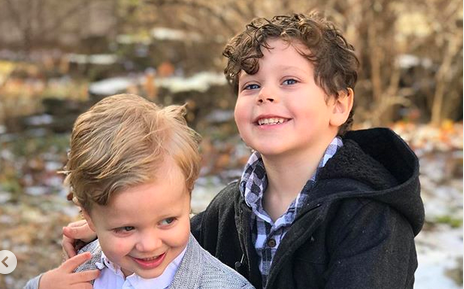 Duggar fans know that siblings don’t always get along. Of course, all kids have their moments. Sometimes, they’re sweet and get along really well. Other times, they argue nonstop. It happens.

In the past, fans of the 19 Kids & Counting family have said that the kids seem to be really well-behaved.

Jessa and Ben Seewald’s kids, in particular, seem to get along well though. Based on the family’s social media posts, fans think that their kids are best friends.

How many kids does Jessa Duggar have?

Jessa has three kids with her husband Ben. Splurge on is 4, Henry is 2, and Ivy will be one in May. Duggar fans agree that their house must be a busy place.

It’s not clear as to if and when Jessa and Ben will have another baby. The kids are about two years apart so they may wait until Ivy is a little older before having another child.

Throwback to the 3 days when I wore the mustache. 👨🏻‍🦱😁 We have so much to thank the Lord for this year! From date nights to diaper changes, stomach bugs to story times, there’s no place I’d rather be than right here with this crew. It was a joy to add Ivy to our family this spring, and it’s hard to remember what life was like before she was around. She’s such a happy little girl, and she hardly ever cries. This little ray of sunshine brings a smile to everyone she meets. It’s been wonderful to watch the boys grow, and to see them playing and interacting more. Spurgeon just turned 4, and Henry is 2 1/2. Even with the little bouts of sibling rivalry, they truly are each other’s best friends and they love each other so much. They are practically inseparable, and they do everything together. And just a few weeks ago, we celebrated our anniversary. I can’t believe it’s already been 5 years! It seems like just yesterday we were exchanging our vows, and here we are now, half a decade in. It’s such a wonderful adventure doing life with you, Sweetheart. I’m so thankful God gave me you.

Jessa also mentioned adoption in the past. There hasn’t been an update on that and they may not have even started the whole process. Perhaps it was just an idea they were throwing around.

A while ago, it seemed that Jessa wanted a large family and Ben didn’t. Only time will tell how the couple feels about the size of their family.

As mentioned, kids don’t always get along. But, Ben captured a sweet video of the two boys playing Jenga together. The whole time they are taking turns and helping each other out.

New favorite game for these boys.

Duggar fans are loving the new video because of how sweet the boys are to each other. Ben says it’s their “new favorite game.”

In the comments, fans are praising Ben and Jessa for the parenting skills. They are impressed with how the two kids play together. They’re not fighting over whose turn it is or taking the pieces from each other.

Someone commented and said, “My grandsons would be slugging by now.” Another one of Ben’s followers mentioned how nicely “Spurgeon moves his little brothers hands away.” They added that they haven’t seen young kids do that before. Usually, there’s some kind of fighting or yelling involved.

Someone said that Ben and Jessa did a good job of raising, “smart but mind boys.” Overall, fans are loving the new video. They hadn’t seen how the two boys interact with each other before.

What do you think of the video Ben shared? Do you follow the Duggar family on social media for the latest updates? Leave a comment below.