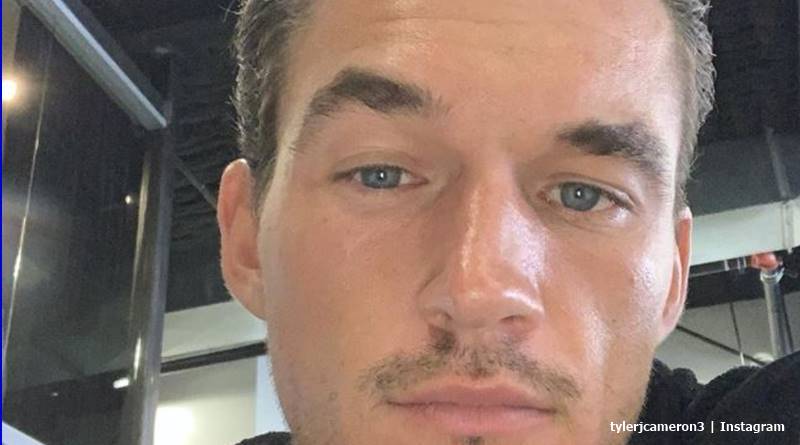 Tyler Cameron hangs out with high profile people these days. He chats with Andy Cohen and dated Gigi Hadid. Recently he went on a date with Anastasia Karanikolaou. That placed him in the Kardashian family’s circle. So, when he shared a photo and a fan posted a flirty comment, they were thrilled that he responded to them.

Tyler Cameron gets a flirty comment, responds to fan

On Wednesday, Tyler took to his Instagram and posted a sponsored post. The photo showed him in the mountains of Montana. His caption read, “Whole lot of MANtana. Thankful for @smirnoffus bringing us to the beautiful state of Montana. I have fallen in love with the mountains and the seltzers ❤️.” Over a hundred thousand people liked the post. And, 650 people commented. If Tyler were to answer anyone, he certainly got plenty of options to choose from.

One fan suggested, “too bad I’m not there.. you could fall in love with me too.” Then another one said to Tyler Cameron, “Oh my GOD please DATE ME.” They kept coming. Here’s another comment, “Surprised you didn’t melt cause ur so hot.” Then plenty of fans suggested he could fall in love with them too, as they live in the state. One fan even said, “Can you mount me.” Literally , thousands of these comments never caught Tyler’s attention. But two did.

Tyler responds to two comments, but one fan is thrilled

The first post that Tyler commented on came from a follower who said, “A real life SNOW BUNNY 😍.” Tyler replied, “uh huh honey.” But then, @sarahndipity18_ commented, “lemme show u my mountains.” In one word, Tyler said to her, “SARAH!!!” She responded to Tyler saying, “ngl I’m a little embarrassed but I stand by it.” Well, other followers couldn’t get over it. One follower said to the commenter, “I knew I should have had a more edgy comment. Darn me.” Others applauded Sarah, and one wrote, “shots 👏🏻 shots 👏🏻 shots 👏🏻.”

But one person said to Sarah, “I can’t believe this is how you got him to notice you out of all the ways in the world.” Sarah said, “me neither tbh this is wild even for me.” Well, over on her Instagram, we found a rather upbeat person who gets around a lot. Her profile just describes her as “hashbrown no filter | Baylor FDM • 2017.” Sarah’s got 1,171 followers. But a quick check revealed that Tyler Cameron’s not one of them. Maybe that will change one day? After all, TV Shows Ace reported that he’s not seriously dating right now.

#ad Whole lot of MANtana. Thankful for @smirnoffus bringing us to the beautiful state of Montana. I have fallen in love with the mountains and the seltzers ❤️

ET Online reported that Tyler Cameron turned down the offer to be on The Bachelor. So, right now, he’s free to play the field as much as he likes. What do you think about @sarahndipity18_ who made a flirty comment and got a response from Tyler?  Sound off your thoughts in the comments below.

Remember to check back with TV Shows Ace often for more news about Tyler Cameron.