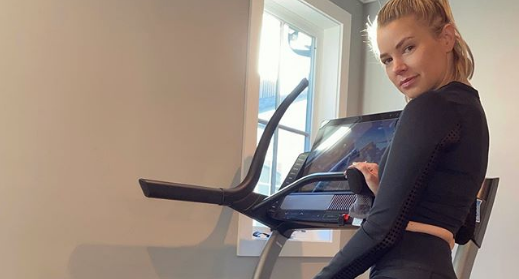 Ariana Madix came out as bisexual on a previous episode of Vanderpump Rules. But that hasn’t stopped her costars from questioning her relationship. Even though Ariana Madix and her boyfriend Tom Sandoval seem to be doing well, some have wondered why the couple hasn’t taken the next step.

Jax Taylor is one of those people. He made an inappropriate remark about Ariana’s sexuality during his appearance on Watch What Happens Live. His wife, Brittany Cartwright, jumped in and defended Ariana. Now Ariana is responding to Jax’s comments.

Andy Cohen asked Ariana Madix her thoughts on her costar’s comments that she’s a lesbian. Jax made the offensive comment earlier this month when a caller asked him if he thinks Tom Sandoval is “jealous” about him getting married and starting a family.

That’s when Jax mumbled under his breath that Ariana “likes women.” Brittany Cartwright quickly joined the conversation and said that their costar “likes everybody – just like most of us do!”

Ariana didn’t like Jax’s comment on her sexuality. The moment when Andy brought it up, she rolled her eyes and shook her head, as reported by People. It was clear that Ariana was not happy with what Jax said.

Ariana went on to say that she’s been “open and honest” about her sexuality on the Bravo show. She doesn’t hide the fact that she’s bisexual. She also made it clear that Tom doesn’t have a problem with her sexuality. That’s when Ariana said that Jax “should just chill out.” As TV Shows Ace reported, she previously fired at Jax on Twitter after he made the comment.

The Vanderpump Rules star isn’t backing down anytime soon. He had some heated words about his costars on Twitter. Jax accused Ariana of hiding her relationship with Tom on the show. He also revealed that she’ll take the paycheck but won’t talk about her personal life, as reported by Us Weekly.

“That’s my response to Ariana,” Jax continued. “Most negative person I have ever met.”

Fans told Jax that Ariana has been open about her life on the show, including the loss of her father. He claims that “everyone else” in the cast has been open about their lives as well. Jax previously told Us Weekly that he blocked both Ariana and Tom on social media. During the interview, he admitted that he had to take a “break” from the couple. On this season of Vanderpump Rules, Jax’s friendship with Tom falls apart.

What are your thoughts on Jax Taylor’s comments on Ariana Madix and Tom Sandoval? Do you agree it was out of line? Sound off below in the comments section.

Don’t forget to check back with TV Shows Ace for the latest news on Vanderpump Rules.

Dr. Now Shares A Key Factor In Reversing Obesity: What Is It?
‘Extreme Sisters’ Anna and Lucy DeCinque Engaged To Their ‘Prince Charming’
‘Edens Zero’ Season 1 Netflix Release Date: What To Expect
Mike Youngquist’s Uncle Beau Gets Brutally Honest, Natalie Is A Slob
Duggar Cousin Amy King Offends All Her Male Followers With One Post