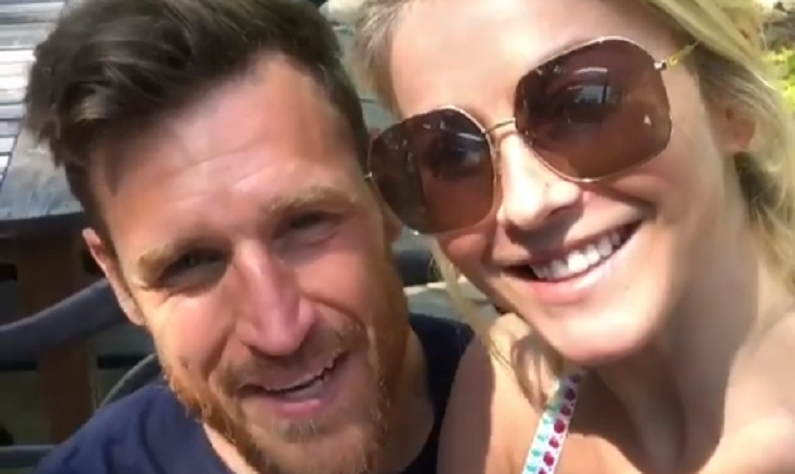 Julianne Hough and Brooks Laich have been dropping subtle hints about their reported troubled marriage. The couple has been making headlines for the past few weeks. It all started when Julianne Hough was spotted without her wedding ring. The rumors really took off when Brooks Laich posted a mysterious New Year’s Day post hinting towards making some major changes in his life.

As TV Shows Ace reported, Gavin Degraw claims that the couple is “healthy and fine.” However, that hasn’t stopped fans from wondering if they’re going through marital trouble. It also doesn’t help that Julianne Hough and Brooks Laich have been posting cryptic messages on Instagram. Celebrities. They’re just like us.

Some fans think Julianne Hough is trying to tell them something about her marriage. She shared a mysterious quote about loving someone who has outgrown them. Hough posted the quote by Heidi Priebe to her Instagram Story. The quote talks about loving someone who is so lost, that they don’t know who they are anymore. This comes after multiple sources told People that Hough has hit a rough patch in her own relationship with Laich. 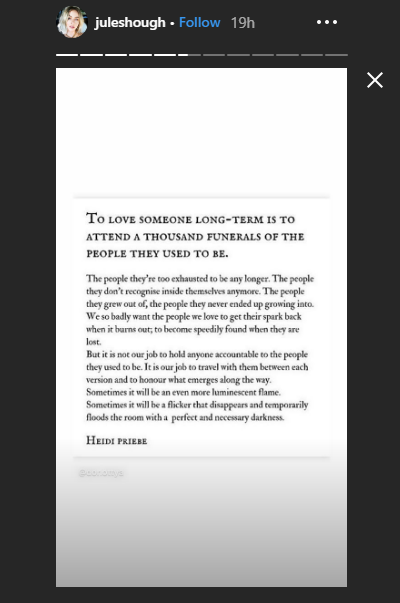 Julianne Hough isn’t the only one who’s getting mysterious on social media. Brooks Laich has also been posting cryptic messages as well. But instead of posting quotes, he’s revealing the changes he’s undergoing in his life.

“Lately I’ve been re-assessing many things in my life, and one of the most important things I’ve been looking at is how I spend my time every day,” Laich wrote in a previous Instagram post. “I’m redefining my priorities, and putting happiness at the forefront.”

In the post, Laich revealed that he’s shaking up his daily routine. He’s also focusing on the things that make him happy. He wants to place those priorities at the top of his list.

Couple has been having “problems for months”

A source previously told People that their marriage has been in trouble for some time. It appears that Julianne Hough and Brooks Laich are complete opposites. Hough enjoys being a “free spirit,” which has been difficult for Laich. Fans first noticed that Hough didn’t wear her wedding ring when she co-hosted NBC’s New Year’s Eve special. She also shared a photo of herself decorating her Christmas Tree and without her wedding ring.

Sources told the tabloid that their rough patch could be “just a phase,” but there could be something larger going on. However, the couple doesn’t intend on addressing their marital problems anytime soon.

Another insider confirmed that the couple doesn’t want to give up on their marriage, but they’re not going to address their issues. They don’t even want to talk about their problems among themselves. Both Laich and Hough feel that it’s common for married couples to go through this.

Neither party has addressed the rumors, and their reps have not responded for comment. Hough and Laich were spotted at the airport, where the two were seen embracing each other. Laich wore his wedding ring while Hough was ringless once again. The couple has openly expressed an interest in having children and exploring their sexuality.

What are your thoughts on Julianne Hough and Brooks Laich? Do you think there is an underlying meaning to their social media messages? Sound off below in the comments section.