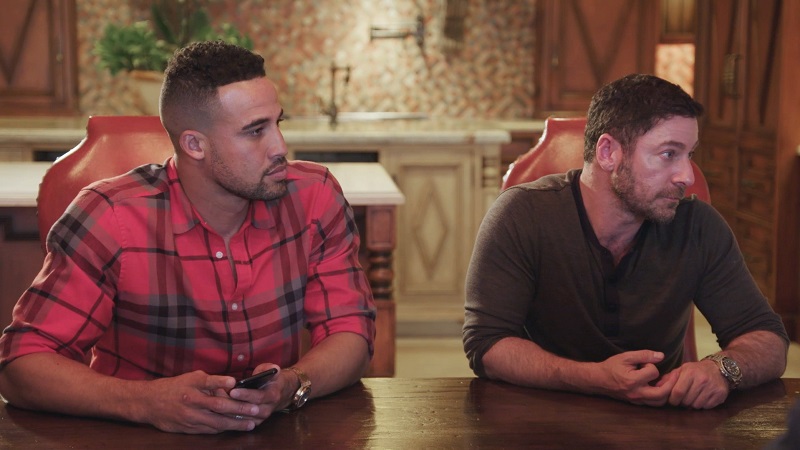 CNBC’s ‘Listing Impossible’ gives Morgan Trent a chance to showcase his real estate career. TV Shows Ace spoke to him about finding success after the NFL.

The new CNBC reality TV series Listing Impossible is putting Morgan Trent back into the spotlight. Some viewers may recognize him from his NFL career, but even while he was still on the field, Morgan had a passion for real estate that has led him to a whole different kind of success.

Now Morgan is one of the hard-working real estate agents featured on the show, as Aaron Kirman and his team work to sell some of Los Angeles’ most expensive—and most difficult—properties. Wednesday’s episode features Morgan while he and Aaron take on a particularly challenging home!

Ahead of the episode, TV Shows Ace talked to Morgan about the show and his personal journey. Get to know Morgan Trent in our interview and then don’t miss a new Listing Impossible Wednesday at 10 p.m. ET/PT on CNBC!

TV Shows Ace: Real estate is a much bigger part of your career than many people realize. How did you originally get interested?

Morgan Trent: It started early. I got my real estate license in the offseason of my rookie year in the NFL, and it’s just something I’ve always been really passionate about. I can’t figure out exactly why. I’d come home from a football game or practice and most of my teammates were watching SportsCenter, but I’ve got HGTV on watching some home show. (laughs)

TVA: Have you been able to apply any of the skills you learned in your NFL career to your business career?

MT: I think so. You always hear that a lot of companies like to hire athletes, because they bring a lot to the table that maybe regular civilians don’t. I think it’s the work ethic you must have in order to reach the NFL. To have a successful sports career, you need to have an amazing work ethic and know how to be self-motivated, get up in the morning and get things done. I think that’s one of the biggest traits, and also working under pressure.

I remember one of my first job interviews after football. One of the bosses asked me, “How do you deal with pressure? We have a deadline that you need to meet.” I kind of laughed. Getting a paper done or something by Friday is one thing, but it’s not being forced to cover Randy Moss on Monday Night Football. I think that’s a little more pressure.

Football is a results-driven business, same as real estate. You either get it done and close the deal or you don’t. There are definitely crossovers between the two.

TVA: Since you did have all those cameras on you in the NFL, did that make it easier for you to be part of a reality TV show with Listing Impossible?

MT: It’s the same but different, I guess. I don’t have a helmet on anymore. People can actually see me. But I started in college, playing at the University of Michigan in front of 110,000 people every week. I do think that kind of prepares you for having a few people following you around with a couple of cameras. I’m not too camera-shy because of my background with sports.

TVA: Your first big episode airs this week. What can you tell us about it?

MT: That is going to be very interesting. We have a bit of a difficult seller, so it’ll be fun. There’ll be some fireworks that suddenly show. I’m interested and excited to see that one. Every story is different and every house is different. I think it’s going to be fun for people to see the season—the ups and downs of our team and for myself.

TVA: How competitive is your office? It seems similar to a football team in the sense that Aaron Kirman is always pushing his agents to be better.

MT: For sure! I think that’s what was great about Aaron. He wants us to do well; selfishly of course, but he wants us to do well for ourselves. When he recruited me for about a year to come over and work with him, one of the main things that made me make the move was him saying, “Listen, I want to make you into a great agent. I want to put you in front of people. I want you to do well.”

He didn’t say I have to use his name. I don’t have an email with Morgan [at] Aaron Kirman. I have my own brand and he was there to help with that, which is great. Real estate is competitive and not just with the 45,000 agents that are in a 30-mile radius. We’re ultra-competitive on the team, but it’s more so we just do well. We want to feed our families and want to see everybody on the team do awesome.

What should you know about Morgan Trent?

TVA: Is there something you hope reality TV viewers pick up from Listing Impossible?

MT: I think our whole point of [the show] was trying to really give an authentic look at real estate, specifically L.A. real estate. I can fully understand and empathize with people when I say, “Listen, this is not reality. I don’t have a $10 million house.” This really has nothing to do with me, but I think there is some crossover whether you have a $30 million house or a $300K house. There are certain things we want to show that are reality to everybody.

When you’re selling your home, it has to be priced correctly. I think regardless of the price, a lot of homeowners and sellers expect buyers to pay for memories they’ve made in their own home. If I’ve raised my kids in this home, there’s sentimental value and there’s emotion to it. And 90% of sellers are emotionally tied to their homes. That’s portrayed; their prices and how they go about things. I think it’s really cool how we go in and it’s different for us. What we do is authentic.

This is not staged like some real estate TV shows out there. This is what we do on a daily basis. We are able to be honest with sellers and our clients and tell them the truth that ultimately helps them sell homes and helps us make money. It’s a win-win.

Also, I want people to see that I’m not looking to be in the spotlight. I want to do my business and provide for my family and have fun doing it. I don’t take myself too seriously. I enjoy what I’m doing, and I hope that’s portrayed well.

TVA: So what’s one thing about Morgan Trent fans should know?

MT: I don’t lead with football. I’m not the guy who runs around with my football jersey on saying “Look at me. I played for the NFL.” I don’t want to discredit that, because it was a great accomplishment and a blessing for me to be able to live out my childhood dream, but that’s over with and now it’s onto my second career.

I want to be known as Morgan Trent, businessman. I think one of the greatest accomplishments and greatest praises I can get is when they mention football second. I’d love for people to say, “He’s accomplished and, by the way, he played in the NFL.”