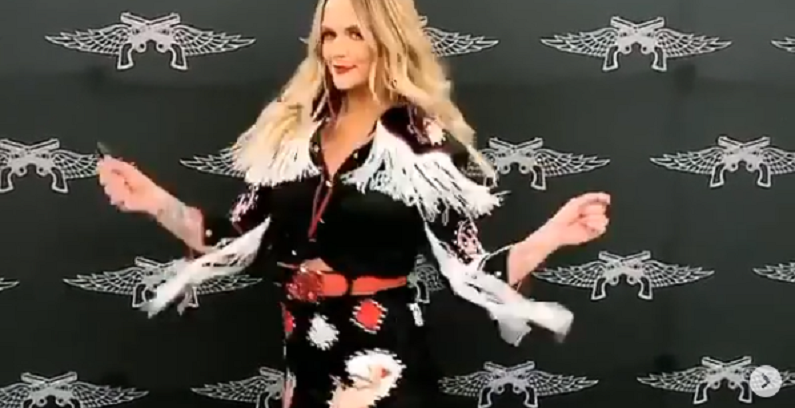 Miranda Lambert wasn’t bothered by Blake Shelton and Gwen Stefani’s performance at the Grammys on Sunday night, Jan. 26. It also didn’t matter to her that she lost out twice to Tanya Tucker, as reported by CMT. Sunday night was still a special night since it marked her first wedding anniversary to husband Brendan McLoughlin.

The couple secretly got married on Jan. 26, 2019 on a farm in Nashville. As TV Shows Ace reported, the country superstar returned to her stomping grounds as part of her nationwide tour. But on Sunday, she took to Instagram to celebrate their first year of marriage. Read Lambert’s touching post below.

She is “so happy” despite Grammys disappointment

Since their blessed union was a secret, the couple didn’t announce they were married until February 2019. Now their marriage is all that Miranda Lambert can’t stop talking about. She shared a beautiful photo from their wedding day with the caption: “1 year.” In the lengthy caption, Lambert thanked McLoughlin for “making me the proudest wife and stepmom.” She also blamed him for her “new smile lines.” In the post, she included many hashtags, including “Mrs. McLoughlin.”

1 year ❤️. I’m so happy to walk through this life with you. Thank you Brendan for making me the proudest wife and stepmom. You are the reason for all my new smile lines. I love you. #MrsMcLoughlin

As Us Weekly reported, she shared a photo of a bouquet of flowers given to her by her husband on her Instagram Story. She wrote in the caption: “Thanks babe! 1 year!”

She posted the sweet messages hours before the Grammy Awards on Sunday night. Lambert was nominated for Best Country Song for “It All Comes Out In the Wash” and Best Country Album along with her band, The Pistol Annies. However, she lost both to country legend Tanya Tucker, which isn’t such a bad thing.

Miranda Lambert doesn’t trust her husband with this one thing

Lambert had an exclusive interview with Taste of Country in lieu of Grammys weekend. She talked about her future birthday plans. She revealed that she doesn’t have anything planned because she’ll be returning to town and didn’t want to set any concrete plans. McLaughlin told her he would plan everything, but Lambert didn’t take him on his offer.

“It’s hard for me to give up control,” The Nashville Star alum revealed.

She trusts her husband except when it comes to planning things out of her control. She would rather take on those plans herself. The hosts asked her if it was something her husband did that lead to her lack of trust in him. Lambert admitted their marriage is so new that she hasn’t allowed him to plan anything special.

As TODAY reported, she was very emotional on Friday night in Nashville during her Wildcard Tour. The singer opened up about her 2015 divorce from Blake Shelton. Lambert called Nashville her safe place where she could get away from it all.

She then admitted that her divorce was such “a s**t show” that Nashville helped her during that difficult period in her life. Lambert relied on her support group, which consisted of her family, friends, fans, and fellow songwriters. Lambert and Shelton divorced after four years of marriage. But she moved on to find happiness and love again.