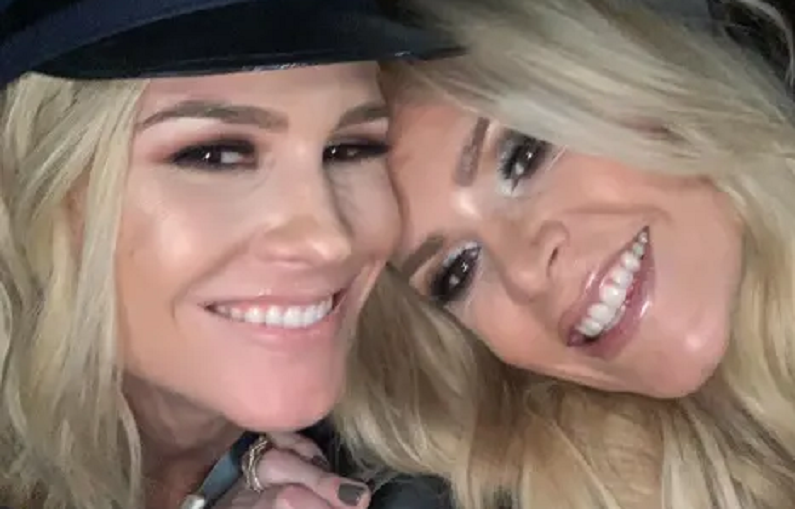 Meghan King Edmonds isn’t as shocked that Tamra Judge announced her departure from The Real Housewives of Orange County. Fans nearly had a meltdown when they learned the news this weekend. Some of them are happy that she’s finally gone while others are sad to see her go. Someone isn’t baffled by the news and that’s Tamra’s former co-star.

Meghan King Edmonds revealed what she thought of the announcement. RHOC fans went into a tailspin when both Vicki Gunvalson and Tamra Judge announced they were leaving the Bravo series on Jan. 24 and Jan. 25 respectively. Meghan King Edmonds starred on the series with the ladies during Seasons 10-12. She then returned in Season 14 as “Friend of the Housewives.”

Meghan sat down for an exclusive interview with HollywoodLife.com just days before Vicki and Tamra made their shocking announcement. She’s been promoting her new podcast Intimate Knowledge with co-host Brooke Burke. Meghan revealed that she’s still in touch with Tamra. She’s even kept up with the “drama” that her fellow co-star has been through. That’s when Meghan revealed that Tamra had intentions to leave the show.

“Well, I did talk to her and she said that she’s kind of sick of some of the drama and stuff and that she wouldn’t be mad if she decided to leave,” Meghan let it slip. Her interview with HollywoodLife.com occurred on Jan. 23 but it wasn’t published until Jan. 26.

I’m gonna manifest the shit outta all the good stuff that’s gonna happen to me in 2020. Who’s with me? 🙋🏼‍♀️#futuresobrightigottawearshades

She realized her mistake but then she said: “Hope she doesn’t care that I say that. I don’t think she will.”

Vicki first announced that she was leaving RHOC since its inception in 2006. Tamra then followed up with her own announcement. Both ladies didn’t like being demoted to “Friend of the Housewives.” But they’re both excited about their respective futures.

Unlike Vicki and Tamra, Meghan wouldn’t mind being a “Friend of the Housewives” once again. She previously expressed interest in returning to the Bravo series. During her interview with Us Weekly, she said she would return to the reality series but only on a “friend” basis.

“I would totally love to come back as a friend,” she continued. “I would love that. I think I’m in a place where I could do that, so may I will!”

Monochrome on the outside, rainbow color explosion on the inside 🌈 2020 is our year! Raise your vibe and let your light shine 💫 countdown is ON … set your intentions NOW! I need some more good ones… help me out!

Meghan’s other podcast co-host, Lila Darville, said she could join The Real Housewives of Beverly Hills. That’s when the St. Louis native expressed an interest in joining that series before. It would be the first for a housewife to jump from one series to another. But it still could happen.

She admitted that she doesn’t watch much television these days. But she tries to “keep up with the gist” of RHOC. Meghan has also been keeping up with Vicki’s feud with RHOC costar Braunwyn Windham-Burke. That’s when the blogger also let it slip that the show is undergoing some “drastic changes.” But even her co-stars and the production company can’t keep up with the rumors.

Pretty sure I’m a big ole star now… Um, righttt. In my latest blog post I take a tongue-n-cheek approach to this Hollywood life. Is this real life or is this fantasy? You HAVE to read about my @tmz_tv experience! 😂 Link in bio @intimateknowledgepodcast @iheartradio

“I heard a rumor that Orange County is going through some drastic changes but I feel like there’s that rumor every year, so you never know,” Meghan said. “I literally text production and all the cast and ask them if rumors are true and they’re like, ‘Oh, I don’t know!’ Nobody knows.”

What are your thoughts on Meghan King Edmonds’ response to Tamra Judge leaving RHOC? Sound off below in the comments section.

Don’t forget to check back with TV Shows Ace on the latest news on The Real Housewives of Orange County.

‘DWTS’ Brian Austin Green Gets Support From Ex Vanessa Marcil
’90 Day Fiance’ Spoilers: Are Syngin And Tania Still Together?
Lisa Rinna Continues Campaign To Get Daughter Amelia Gray Hamlin And Harry Styles Together
Is Kendra Duggar Strapped For Cash After ‘Counting On’ Cancelation?
Chase Chrisley Shuts Down Todd, Gets Good Qualities From Julie