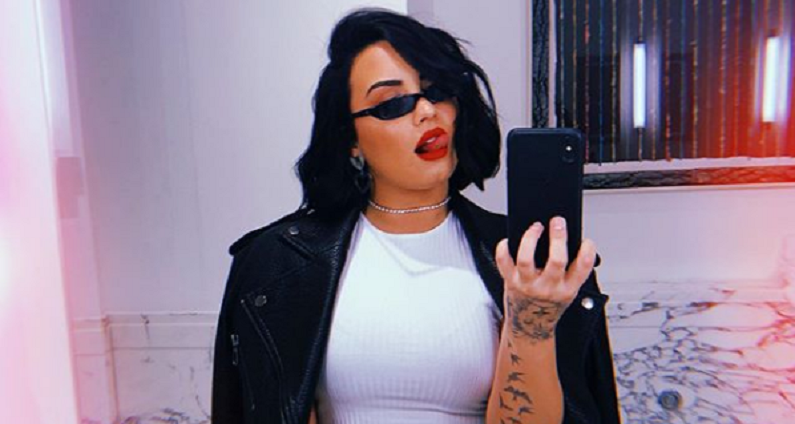 Demi Lovato is set to perform at the Grammys on Sunday night. Just a few months ago, the actress prepared to make her big debut on Will & Grace, as reported byTV Shows Ace. Now she’s preparing to return to the stage since her overdose in 2018. She’s expected to perform a raw and emotional new single called “Anyone,” which she recorded four days before her drug overdose.

She feels ready to take on her powerful performance. The life-changing event almost took her life. But she’s been inspired by it and wants to get through it with the help of her faith. The 27-year-old singer and songwriter sat down for an exclusive interview with Zane Low for Apple Music. It’s the first interview since she was hospitalized for her drug overdose.

Demi Lovato says she found comfort in the Lord

She talked about her upcoming single “Anyone,” which she wrote four days before she overdosed on drugs. In the interview, Lovato admitted that she wasn’t always “a big church person” because she couldn’t fine one that was accepting of her sexuality. Lovato came out as bisexual and is an LGBTQ ally. Being able to find a church that accepts her for who she is allowed her to get closer to God.

“I just found a place out here in L.A. that like accepts me for who I am, no matter who I love,” Lovato said. “And there’s no judgment. And that’s what I needed.”

She also revealed that regularly attending church has allowed her to focus on her relationship with God and herself, instead of leaning on other people or substances for comfort.

Her manager, Scooter Braun, helped her find that solace in the church. He invited her to a Bible study in the middle of a “rough night.” Thanks to her new manager, Lovato is more than ready to make her return to the spotlight.

GUYS!!!!!!! Dreams came true today for me. I officially have a NEW MANAGER!!! And not just any new manager but the one and only @scooterbraun!!!! Couldn’t be happier, inspired and excited to begin this next chapter with you Scooter!!! Thank you for believing in me and for being apart of this new journey. Let’s DO THIS!!!!!! 🖊📄🎉

She made her big ‘Will & Grace’ debut

The singer has been posting plenty of behind-the-scenes photos from the show. On the NBC series, Lovato plays Jenny, a surrogate hired by Will (Eric McCormack) who decided to have a baby on his own. On the January 9 episode, Will was excited to meet Jenny because she has a wonderful uterus, as reported by E! Online. Despite Jenny’s great reviews, Will begins to have doubts after he visits her at her home. She doesn’t posses the type of maternal skills that he’s going for.

They’re the dream team 🙌🏼 honored to be a part of this cast. Last night was amazing and I can’t wait to return for more!!! Thank you @nbcwillandgrace 💗💗💗

Lovato may be known for her work in the music industry, but she has taken on several small screen roles in the past. She has starred on Fox’s Glee and El Rey Network’s From Dusk Til Dawn: The Series. Lovato reached the height of fame when she starred in her own Disney Channel series, Sonny With a Chance, from 2009 to 2011. Lovato joined Will & Grace during its second and final season.

Following her return to the Grammys stage, Lovato will then sing the national anthem at the Super Bowl on Sunday, Feb. 2. Between the Grammys, Will & Grace, and the Super Bowl, it’s clear that Lovato is ready to make a big comeback.